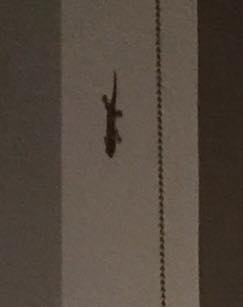 Vance tells us about his time in Rainbow Beach

So Liz shouts from downstairs in the most recent Airbnb that there’s a spider on her wall. Now, this strong, dare I say robust, beautiful woman had such a sound of disdain in her voice when she announced her arachnidal intrusion that I had to go investigate. In fact all of us did. Courtney, road manager, this apparently being part of her job, came armed with a bowl and a magazine.
We got to Liz’s room door and it was just hanging out on the wall, legs spread about the size of a teacup saucer.
“Oh it’s a little one” says sound engineer Harry, well out of the way, and apparent Nostradamus of mayhem . Little one my ass. It looked like a mid-sized ceiling fan with fur to me.
Courtney goes to trap it with the bowl. It’s fast.
It scurries. Liz and I scream. The spider runs again. Courtney gets closer. She lowers the trap bowl again. We scream. The spider jumps. Courtney jumps. We scream at the jumping. Courtney jumps at our screaming.
We are sent away.
After basically rearranging the room our hero takes the spider out. There are no pictures of any of this event. I was busy.

Tonight there’s a gecko in my room. See it? Next to the curtain chain? Now that’s awesome. Little cutie lizard with suction cup feet, and eyes that make sense on the sides of its face. “Take *that* spider-ass spider fuzzy-ass multiple pairs of eyes-havin spider-face sucker,” I say to myself in my go team inside voice. But it’s a little gecko. And I just went online and read that huntsman spiders can eat gecko.
That’s just wrong. Now I have a biology degree, and I know better, but this still this sounds like a dragonfly kicking an alligator’s ass. Bugs don’t eat reptiles. That’s not fair or right, and you know it. And I know spiders aren’t bugs. Never you mind- I was being colloquial. It’s just ain’t right.
Good luck little buddy. Please scream if you become midnight snack so I can scream for Courtney and her bowl and magazine.

After a seafood dinner tonite at a beach club(?) we’re driving down a residential street, truthful, brave lyricist Liz driving and spider-hunter Courtney shotgun, when a family is spotted walking a 6-week old Australian Shepherd. Liz stops the car, rolls down the window and announces to the family “I’m the local police and I am arresting that dog for being so cute!”. They both clamber out after asking if petting was ok, and proceeded to get licks and give pats and speak in puppy love voices for the remaining 1/4 mike of the drive home and into the house, did these strong, respectable, and now quite squeaky women.

Servo – gas station
Beet root – beet (did I do this before? It’s still weird. Like they don’t say “mashed potato root” or “I’ll have some grilled sliced onion bulb on that sandwich.” I get the physiology already. But they put beets on a burger. That’s still messed up.)
Brekky- breakfast. I will NEVER order that like that.
Tomato sauce – ketchup or catsup