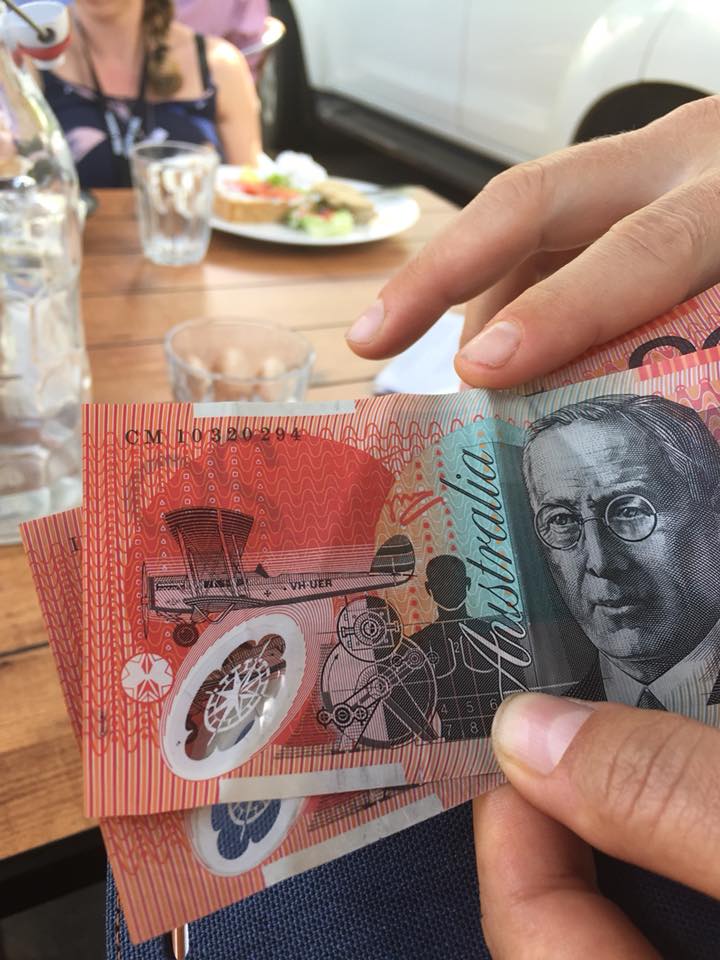 Vance Gilbert tells us about his first show in Wyreema and the wonderful people he has met.

Yesterday was a riot- the gig was really fun Wyreema. The hall had a slightly odd vibe to it as if they weren’t quite sure what to do with this folk music thing. Lovely set from Liz Stringer Me cracking my jokes to no response and tapping the mic with my hand in that old Poconos resort comedy show method when a line bombs- “Is this thing on?“. Still folks dug it. Blackbird with Liz on lead unplugged was unqualified success.
There was a lot of burgers and sausages to the point that we even took some back to the Airbnb in a liberated oversized Tupperware. Did I tell you I was on a low-carb diet?
One of the funnier things that happen for me was the host that evening, young woman by the name of Amanda, whose husband is a coal miner and goes away for weeks at a time and then comes home for a week…..Well we were sharing about our lives as/with people that go away for long stretches of time, and something came up about me being lactose intolerant and she looked at me and said “me too!”.
Then just to be silly I said “well my birthday is in October…”.
“ shut up! Me too“ replies Amanda.
Then I was all “well, I have a tattoo“.…
She whips up her sleeve and there’s names and such tattooed to her forearm. And a “Bring it..” look in her eye.
Oh it was so on… Seriously on…
“Plus, I had open heart surgery has a child, And they replaced a valve in my heart when I was seven years old…” She starts to lift up the side of her blouse to show me how they went in through the side of her lungs to do this.
Oh no you dihhint, girlfriend..
I flip my T-shirt neck line to the side and show her the scar where my pacemaker is and said “Yeah? Well I have a machine put in my chest buy some old crazy white guy who voted for Ben Carson that tells my heart when to beat.“
I don’t think I won this game of personal one-up, but I held my own, and we had a tremendous laugh over it. Great first show. Gift pens. Town council-people speeches. Leftover sausages.

Still:
– Why do Australian wall outlets have a switch over them? I can handle whether my appliances are on or off, thank you very much… And the switch actually gets in the way of the plug.
– Australian SUVs of all brands seem to have their air cleaner or at least the air intake on a long arm comes up from the engine, along the window frame, and sticks up in the air. I’m told that’s to keep the engine from ingesting water when people go off routing in really wet places. That made me a little bit sad, because if you’re off-roading in a really wet place you’re probably not doing the greatest thing for the environment….Damn, humans.
– Everyone to whom I suggest that Vegemite with cucumbers on a sandwich would be a great thing looks at me like I just slapped Crocodile Dundee?
– Why are these Small Halls so cute? They’re resonant and really easy to sing in. 70% of my set is mostly off mic. Sound Engineer Harry Mortimer gets it, too. In fact, travel and all considered, I’m singing pretty well.
– About my really saggy energy – prob shouldn’t have run yesterday am. Scratching my head as to why my legs feel heavy come 2-8 pm- then I remember what time my body really thinks it is. Oh boy… It takes a little while, doesn’t it?
– The beautiful part of the park in Toowoomba I jogged in that had the Anzac Commemorative monuments. Nicely done. So many names. Just from this town. War. Even with our sentient self-aware shid going on. Damn, humans…I stopped running and just walked respectfully and read names. Ok, yes, I’d only run a mile and I was ready to stop running for any reason, but serendipitously….a successful memorial as it surely got me thinking
– Asshat guy, not even drunk, and his wife kept a running conversation with me last night in Petrie. I kept trying to include them, steer them and their interrupting-ness towards the next song, finally had to tell him to shut up. As did the guy behind him – one of those audience as a whole now suddenly uncomfortable moments. After show he was even more offensive. Wanted me to be in a picture with his wife, kept asking her to sit on my lap and for me to “do something nasty to her” for the picture. Slapping my shoulder, really hard, calling me “brawtha”, and suggesting with a wink how much she dug me more than him. Yeah, your basically sexual harassment. Pretty racist to boot too. No I won’t appropriate “Me Too”, but ugh, dude, sir, can you pick just one? I had home office promoter people and the public at large watching, I didn’t want to kill the otherwise really good music vibe of the evening, and it was some pretty disempowering shid. Thanks, however, for reminding me that asshole can be an international thing. Yeah, damn, humans.
– Chemist = pharmacist. Tyre = tire. Burger King is the same sign and lettering and such but is called Hungry Jacks. 20 cent piece is as big as a tea saucer. $2 coinage the size of our dime, twice as fat. Silver dollars like our quarter. $5, $10, and $20 bills all different sizes and colors, like someone mixed up Monopoly, Life, and Payday money. And it will not crease! You fold it- it springs back flat. No rag content. You could roll a half eaten cough drop in it and keep that thing fresh, and it don’t stick! But the $20 bill has a DeHavilland DH50 on it!! All is forgiven.
– 2 hour drive. Still no kangaroos. Local folks, please stop directing me to local zoos.
Xovg