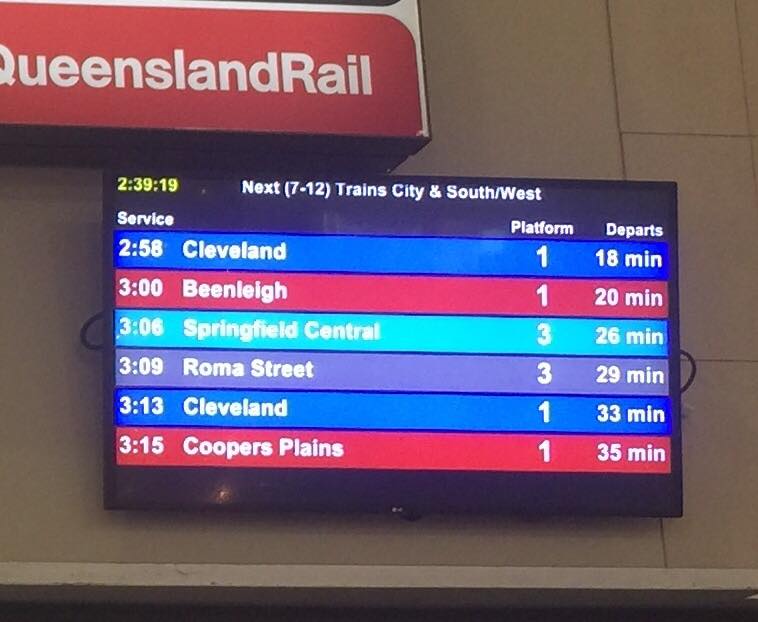 Vance tells us of his adventures in Brisbane , the people he met and the food he ate.

With 2- 1/2 days off I really had no intentions of doing a lot of sightseeing type of things, so I kept it pretty provincial – which is kind of my way. I eat locally. I explore about a miles radius from my digs.
I passed a $7 bookstore. Every book in there was $7. Every one.
Just walked to the PO. Those of you that asked for koalas… Well I didn’t inquire how to mail them at the desk ‘cause I’m certain that asking that would’ve gotten me thrown in jail!

🙂. These postcard pictures are going to have to do.
I was also mailing back the key from Sunday night’s hotel which ended up in my long pants pocket on a day where I had decided to wear shorts. It was a big-assed key on a big-assed chain with a big-assed plexiglas logo. I know many small staying places charge you for taking the key, and I don’t blame them as they have to change locks and go through all kinds of other permutations to secure their premises.. And I still managed to deep six it. I am so not bright sometimes.
Here’s that email interchange between me and the owners of the hotel:

I seem to have packed away the key to rm 2 in my long pants when I switched from them to shorts, and now I’m 7 hrs away. I am so sorry!!

Would you like it mailed back to you? I’m happy to do so ‪tomorrow morning‬.

Again I’m sorry. Please rub Berry’s belly for me, and thanks again for such a great overnight stay.
Best,
Vance Gilbert.”

“Hi Vance,
Yes that would be great, belly rubbed lol berry says thanks!

Back an forths like that make me love the world.

As I was 1/2 block from heading in to the post office, or the “postal centre” as they call it here, a man with headphones on dropped his car keys out of his pocket and speedily continued on up ahead. I grab them and went after him, and fortunately enough he turned into the post office. I tapped him on the shoulder and handed in the keys. He *thanks maited* me up and down. I swear I did NOT say “No Worries”, as I’m sure he sweated and worried the idea of what might have been, and who was I to take that from him?. This postal office is adjunct to a very people-teemed area, and probably not the greatest of neighborhoods, by observation.
There was a long line at the P.O. and at this point I was card and soft-package shopping, trying to figure out what would best fit these hotel keys. Easily five minutes had passed. A tap on my shoulder, And this man looks me in the eyes and says “Thanks again, maite”.

Key karma at its best.

Man, this Indian food i brought back is hot. I swear she said with a smile that it was mild. I am such a lightweight . Then again, I did opt to not have the rice so yeah, I’m still doing low-carb thing but my mouth is on fire. Rice would have helped.
I’ve been told that historically the reason why much Indian food has cream in it was to soften the heat for the English people that were beginning to eat it, and that these foods were not originally “creamed“ for native consumption. Man this food is hot. Did I mention what a lightweight I am? Lactose intolerant too. So much for taming it afore. Man this food is hot. Just saying. There’s nothing particularly Australian about that. The food is just hot.

There’s a lot of language down here that’s just different enough to need some serious getting used to. Someone called me a “cracker” the other day. I was surprised because I’ve been getting some sun, then I realized they meant that I was humorous and a jokester.
Whew! What a relief.

Then there’s this cheese brand from the grocery store. I was laughing out loud. I’m sure someone was saying the next isle over “what is that cracker laughing at?”, which would surely have confused me and made me laugh even harder.

Then there’s this train station in the mall. Apparently there’s a train to Cleveland. Look out Quantas.

I guess I’d be a cracking up cracker eating coon on a round the world train to Cleveland. And it’d be all ok.
I’m exhausted.
Man, this food is hot…

And yes, around this time of day I sag, just a little teeny bit jet lagged as that is just making it way out of my system as it really is, in my heart and soul, and apparently my body, 2 o’clock in the morning.
And I note that everyone else I know and love is in bed whereas for me it’s the middle of my day in a hotel in a city all the way around the other side of the world. Thanks for the note, Dave. Thanks for reminding me that being me is just fine as that’s what the people that love and know me love best about me. Uncertainty is ok. Wonder a gift. Learning is hard and rewarding, but doesn’t stink like staying stupid. I sure feel like there’s stuff I should’ve known about the world 40 years ago. I’m doing my best. We never stop learning do we? Thanks.

Tomorrow, my AM, I’m collected and it’s back on the road with my great road mates. Here we come, Queensland.