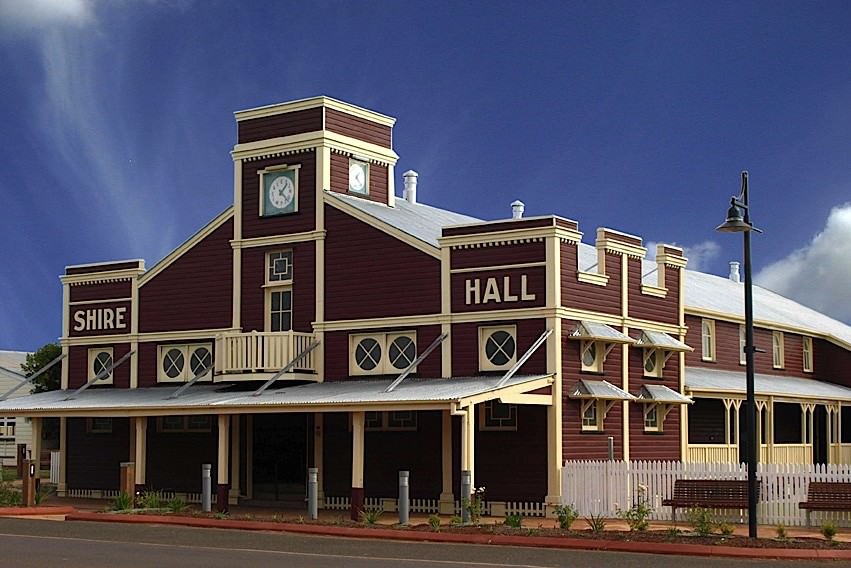 The Warroo Shire council undertook the construction of a new Shire Hall, commissioning renowned architects Harry J Marks & Son, which was opened 7th March, 1930. This was considered a brave move by some at the height of the Depression.

The official opening at the Hall on 7th March 1930 by Mr A J Hunter MP, was well attended, followed by a dinner at the Royal Hotel, then back to the Hall for the Hospital Ball.

Located on the corner of Cordelia & William Streets, Surat the all timber building with corrugated iron sheeting’s original purpose was for Warroo Shire Council Offices and for public functions. The clock set high in the front of the Hall has three faces, instead of numerals, each face has the letters “A.L.E.X.J.S.I.M.P.S.O.N”, who was Chairman from 1925 to 1946 and added after Alex’s death in 1947.

In 1925 an open air supper room was provided by walling in a section south of the hall.

On completion of the present Shire Hall in 1930, the old building was converted to a supper room and was used as such until it was removed on 3rd May 1962, to the Shire Council Depot where it was used as a store. New Supper rooms beside the Hall opened in 1962.