After years of touring the far-flung corners of Australia and the greater world, Darren Hanlon has carved a sacred place in the hearts of many who cross his path with his candid and charming music and storytelling. He is known for his engagement with his audiences and having the ability to make a large crowd feel like they’re in a lounge room amongst friends.

Not deterred by the Covid situation, Hanlon has managed to have a rich few years, appearing in and singing the credits of the new Slim Dusty bio-pic ‘Slim & I’ and garnering high rotation on ABC with his pandemic themed song ‘We All Cope in Different Ways.’

He is also releasing what will be his 6th studio album called ‘Life Tax’ (Jan 2022) written and recorded in the Uniting Church Hall, Northcote with his new band consisting of some of Melbourne’s indie elite: Leah Senior, Jesse Williams, Zoe Fox and Dylan Young. It’s his most stripped back and narrative driven album to date and features the single and already crowd favourite ‘Lapsed Catholic.’

‘Hanlon has a novelist’s eye for detail and sparse prose…While his country Australia accent has been smoothed with years of absence, the upwards inflection on the second last syllable of most lines means the country hasn’t been taken out of him. This delivery adds an element of the bush storyteller, taking his city cousins camping and learning them around the fire in his charming, warm monotone that emphasises what he is saying as much as how.’

‘Former fourth Lucksmith and ex-Simpletons guitarist Darren Hanlon understands that the difference between simple and simple-headed is, quite literally, wit. Like his aforementioned countryfolk, the longtime Australian musician has a knack for quirky tunefulness, good-naturedly ambitious rhymes and tingly everyday details, shared over shopworn guitars and embellished with piano, violin or the occasional toy instrument.’

‘Hanlon’s words – witty, seemingly casual but far too smartly done to be just tossed off – are acutely observant and simultaneously very “us” and very “him”. They are the reasons we would keep coming back even if his songs were merely OK… – they all bring enough to keep you entertained for days. The thing is, though, that his tunes have never been merely OK, despite his casual delivery and thin sound,.. from rockabilly, gospel and country to mountain ballads, folk pop and southern soul.’

Releasing her debut album in 2019, the Americana artist has had many a success including ABC radio rotation, #1 AMRAP radio charting and inclusion on hit country Spotify playlists. Her latest album ‘Unplugged’ hit #1 on the AMRAP radio charts and was the ABC Country Feature Album June 17, 2021.

Whether around a campfire, in RSLs or in the intimate setting of people’s living rooms – this is an artist you simply need to hear. Her captivating live show will have you giggling one minute and in tears the next as she tells stories about her travels, her family and her much loved 1992 Toyota Hiace ‘Pamela Vanderson’.

‘She’s known for having an extraordinarily rare voice…’

‘It’s just so much fun, that girls got amazing pipes, she sounds like Amy Winehouse – but with more of a soulful edge as opposed to a jazz hook.’

‘I really don’t know if we have anyone similar in Australia, I am pretty sure that we don’t. She has similar elements of other artists from overseas, and maybe a touch of Renee Geyer, but basically, she is a one-off. In a close tunnel genre in Australia, Kelly is Queen. She is a no-nonsense, firebrand.’ 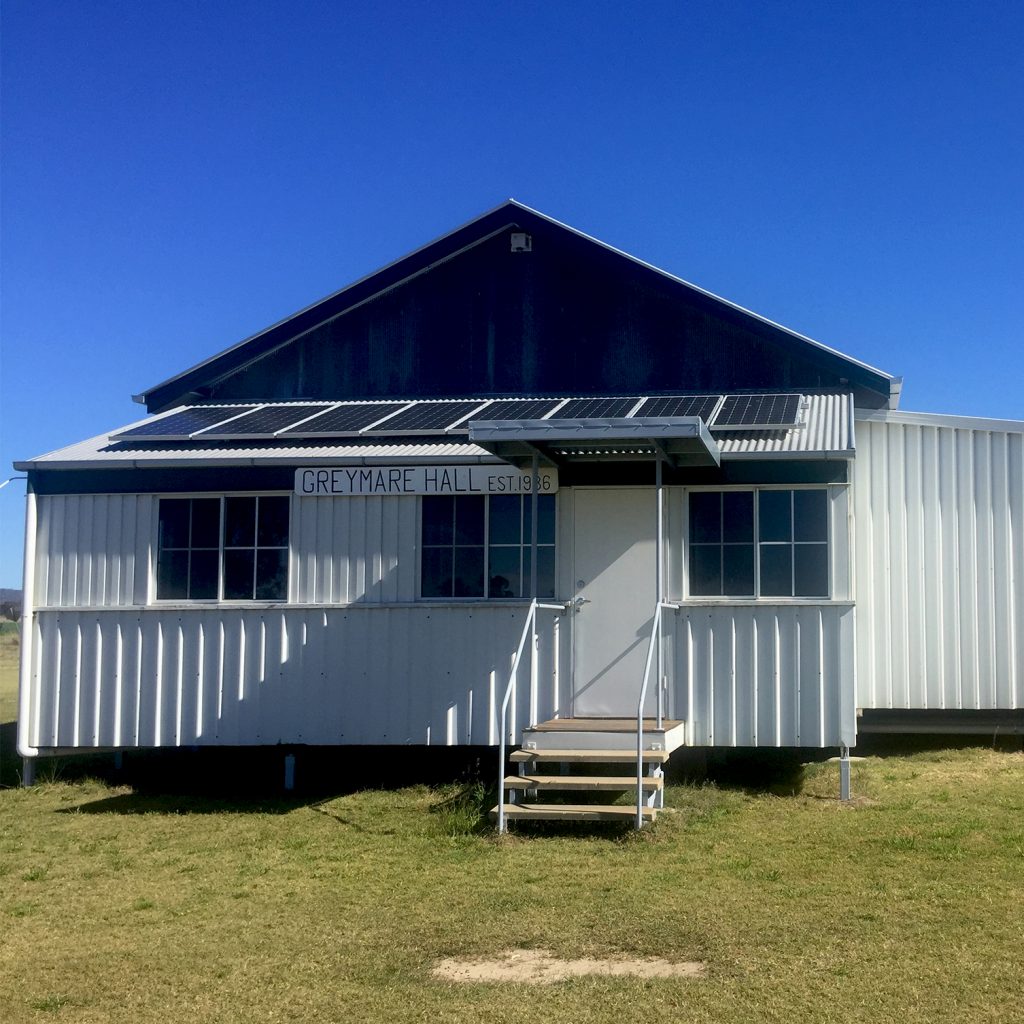 GREYMARE HALL, QLD, GITHABUL COUNTRY The Greymare Hall stands on the traditional lands of the Githabul People Greymare Hall was established in 1936 – an authentic country hall set in the heart of a community steeped in history. In the early days of European settlement, a hotel, cheese factory, sale yards, sports ground and rail siding was the lifeblood of the district. And aren’t … Read more 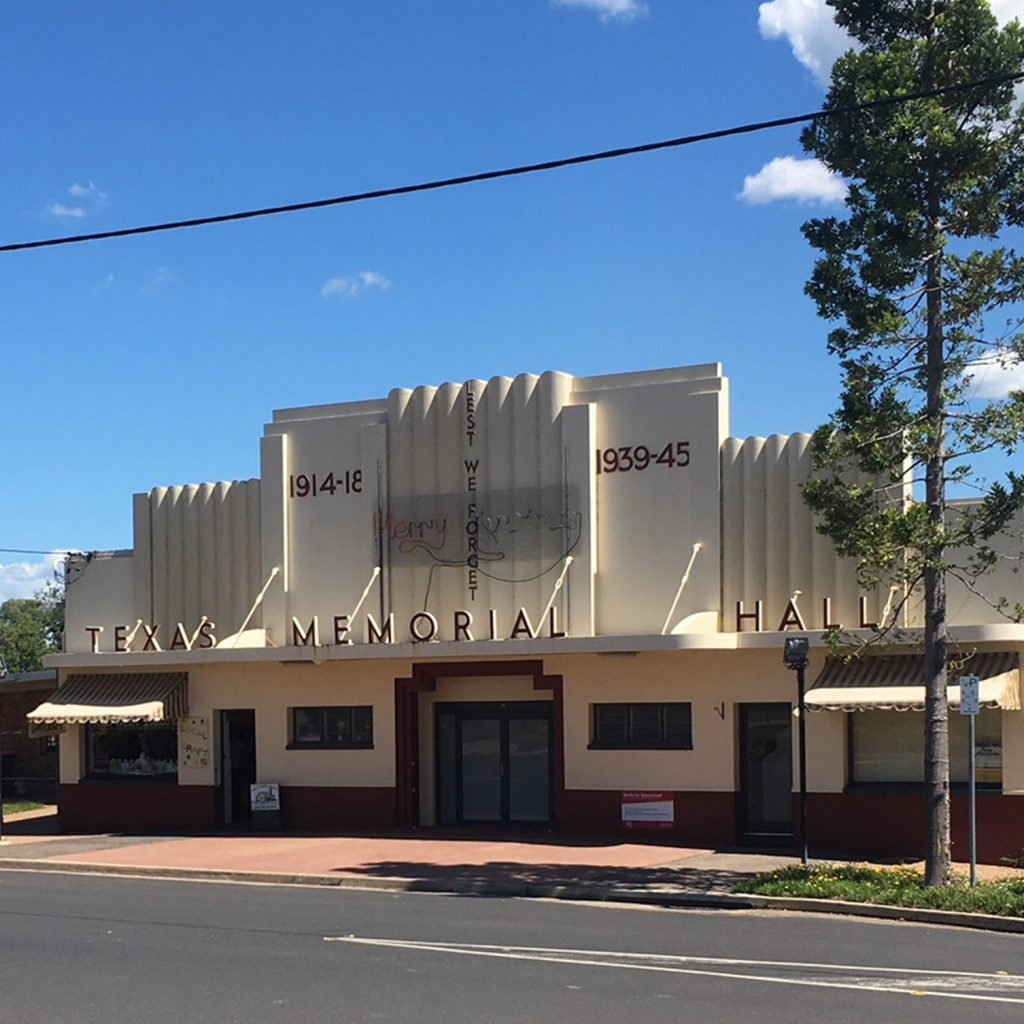 TEXAS MEMORIAL HALL, QLD, BIGAMBUL AND GAMBUWAL/KAMBUWAL COUNTRY The Texas Memorial Hall stands in an area where various Aboriginal groups share interests in the land, including the Bigambul and Gambuwal/Kambuwal people The Texas Memorial Hall was built in 1958 and soon after opening, the stage collapsed during a meeting of local tobacco growers. Let’s hope things have improved since then, or it … Read more 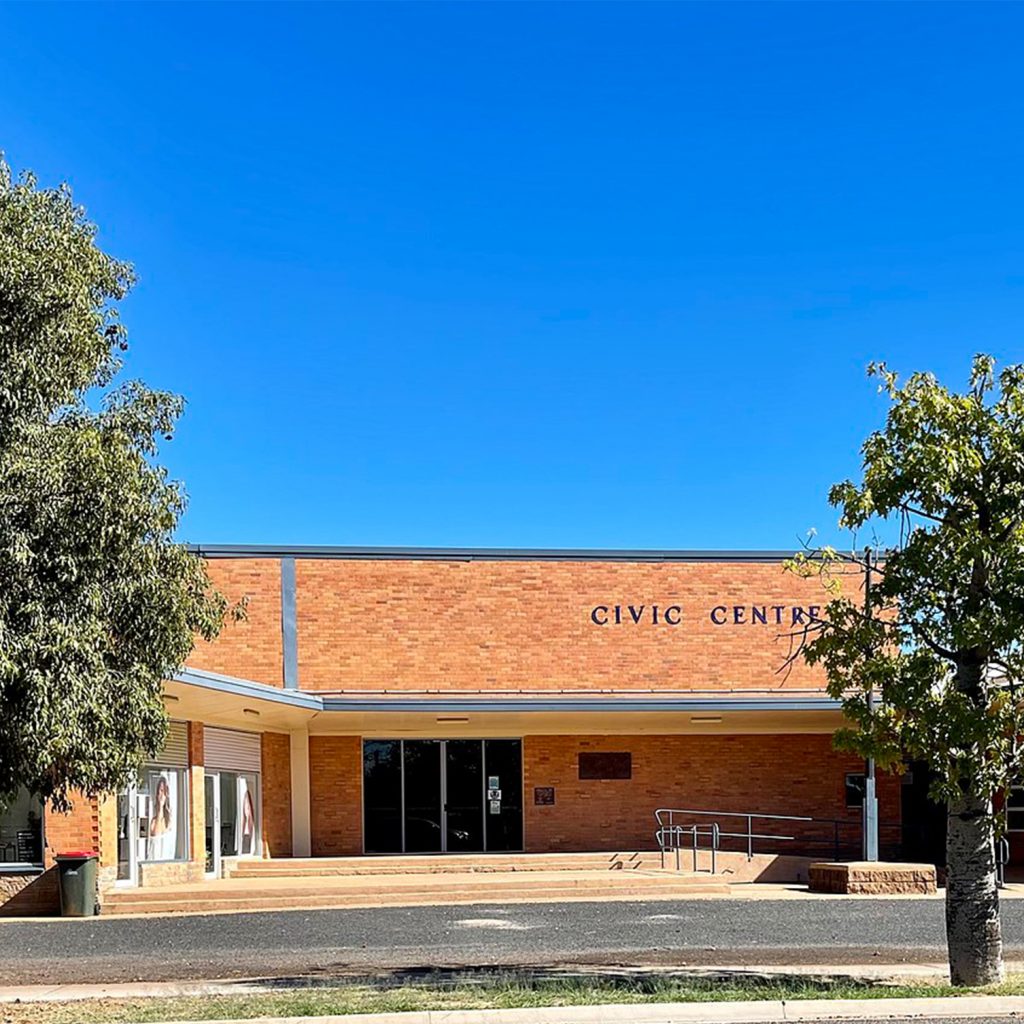 DIRRANBANDI CIVIC CENTRE, QLD Welcome to cotton country! Dirranbandi has three different First language groups: Gamilaraay; Yuwaalaraay and Yuwaalayaay, the last two of which have several words, or groups of words, as well as an original placename, that made their way into the current naming of the town.  Dirranbandi is home to the ‘Dirranbandi Dandy’, as mentioned in Stan Coster’s ‘Cunnamulla Fella’, as well … Read more 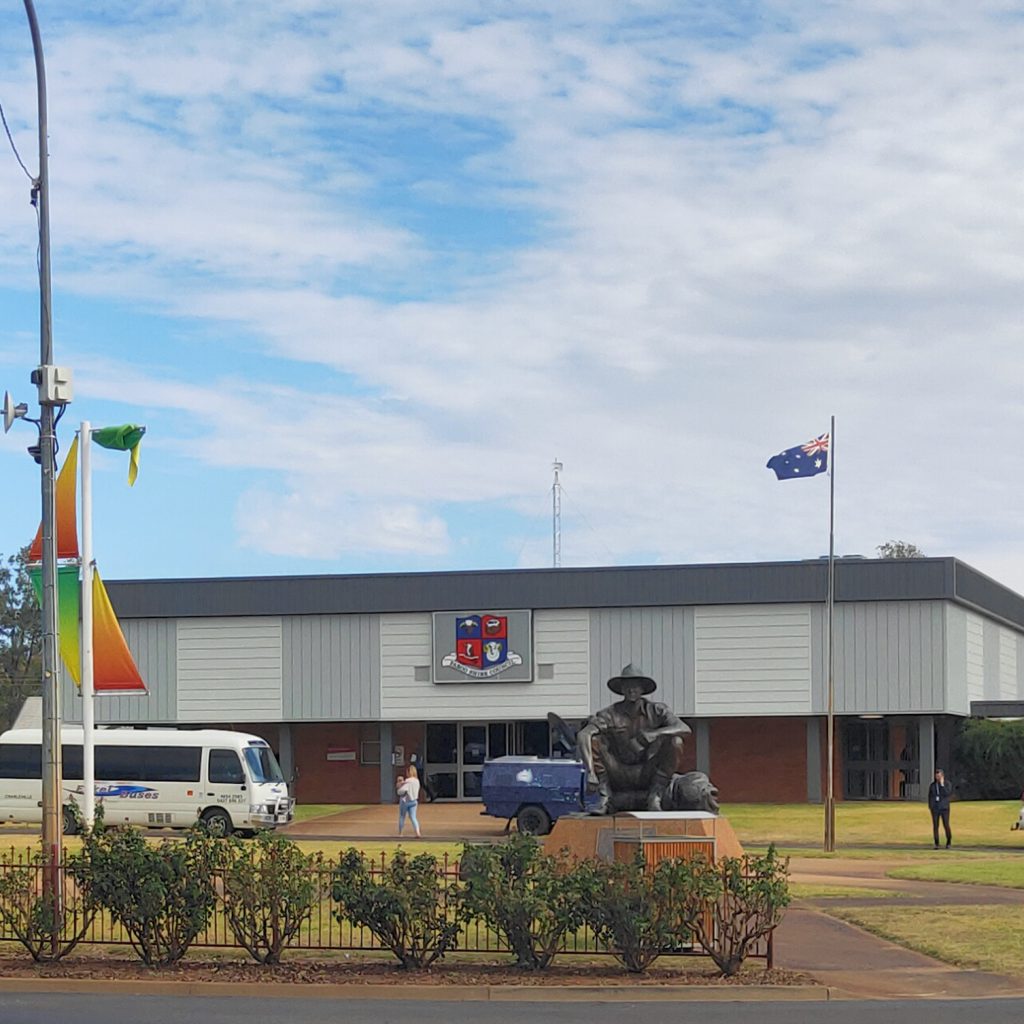 PAROO SHIRE HALL, QLD, KUNJA COUNTRY The Paroo Shire Hall stands on Kunja Country.   The Paroo Shire is a vast region that includes the townships of Cunnamulla, Eulo, Wyandra and Yowah. Cunnamulla lies at the centre of the shire, which is the heart of Kunja Country. The word ‘Cunnamulla’ means ‘long stretch of water’, or ‘big waterhole’, in the language of the Kunja … Read more 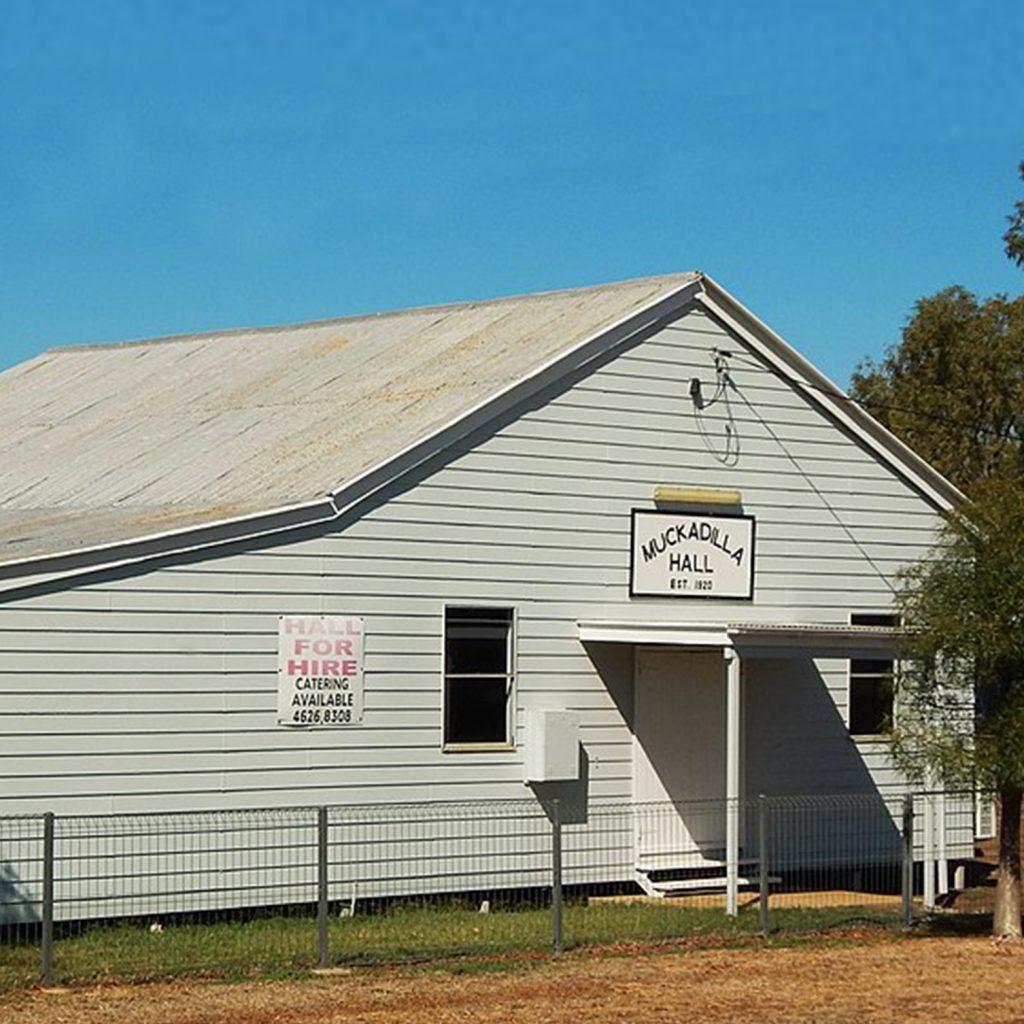 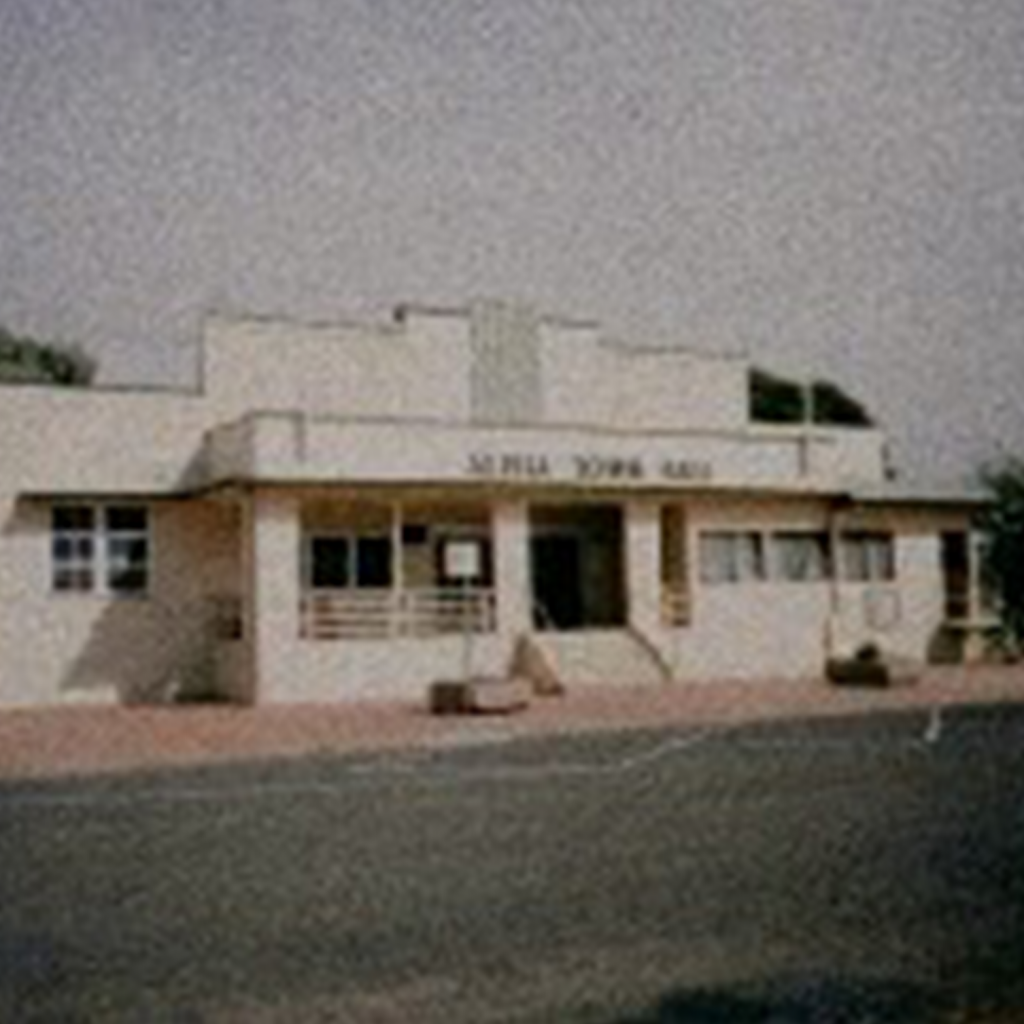 ALPHA TOWN HALL, QLD, ININGAI COUNTRY The Alpha Town Hall stands on the traditional lands of the Iningai people. The Alpha Town Hall was opened by Council Chairperson Frank Langston on 13 December, 1957, with over 750 people present. Designed by Rockhampton architect Arthur E. Hegvold as a large weatherboard building on stumps, the hall in Alpha has a protruding front porch and … Read more 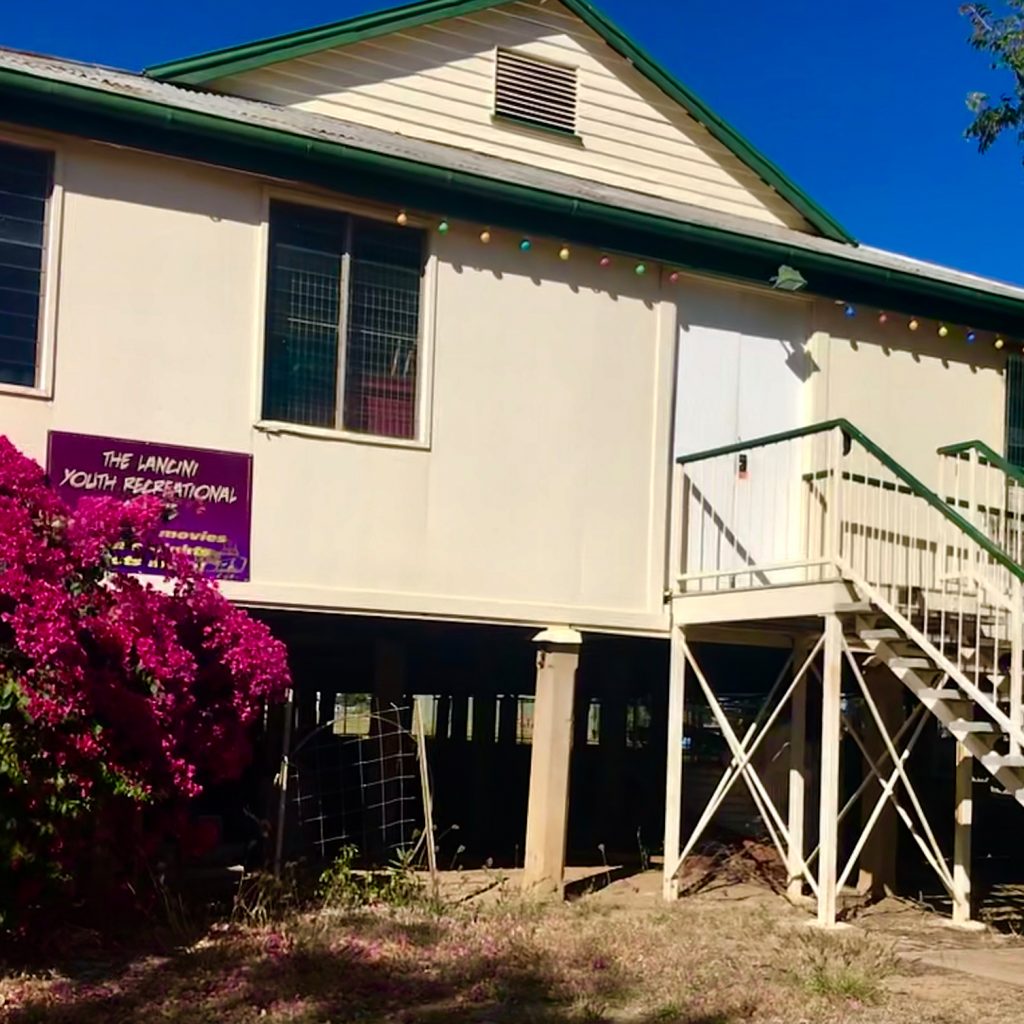 PARISH HALL, QLD, YIRENDALI COUNTRY The Hughenden Parish Hall stands on the traditional lands of the Yirendali people. Explorers William Landsborough and Frederick Walker were the first European explorers to lay their eyes on the vast open grassland downs to the south, and the harsh basalt country north of Hughenden. A blazed historical coolabah tree stands proud as a testimony to … Read more 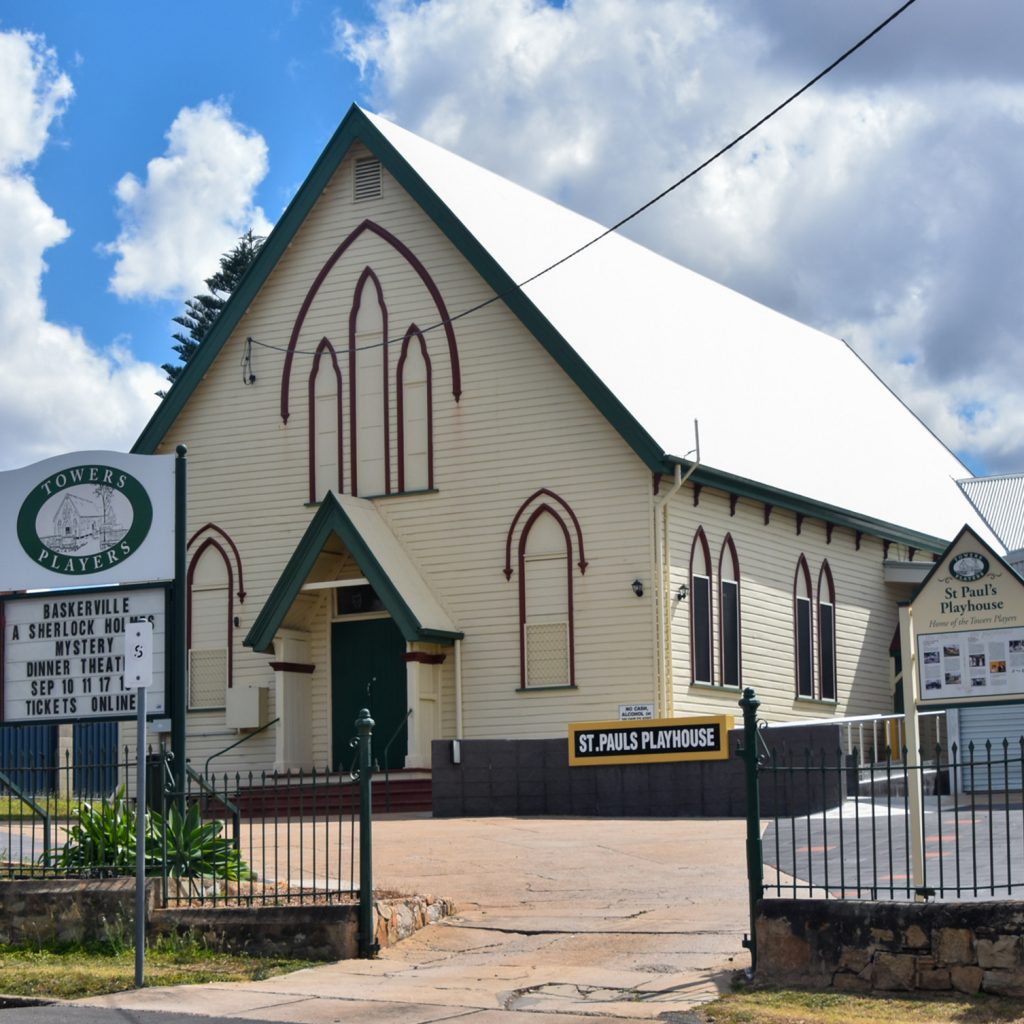 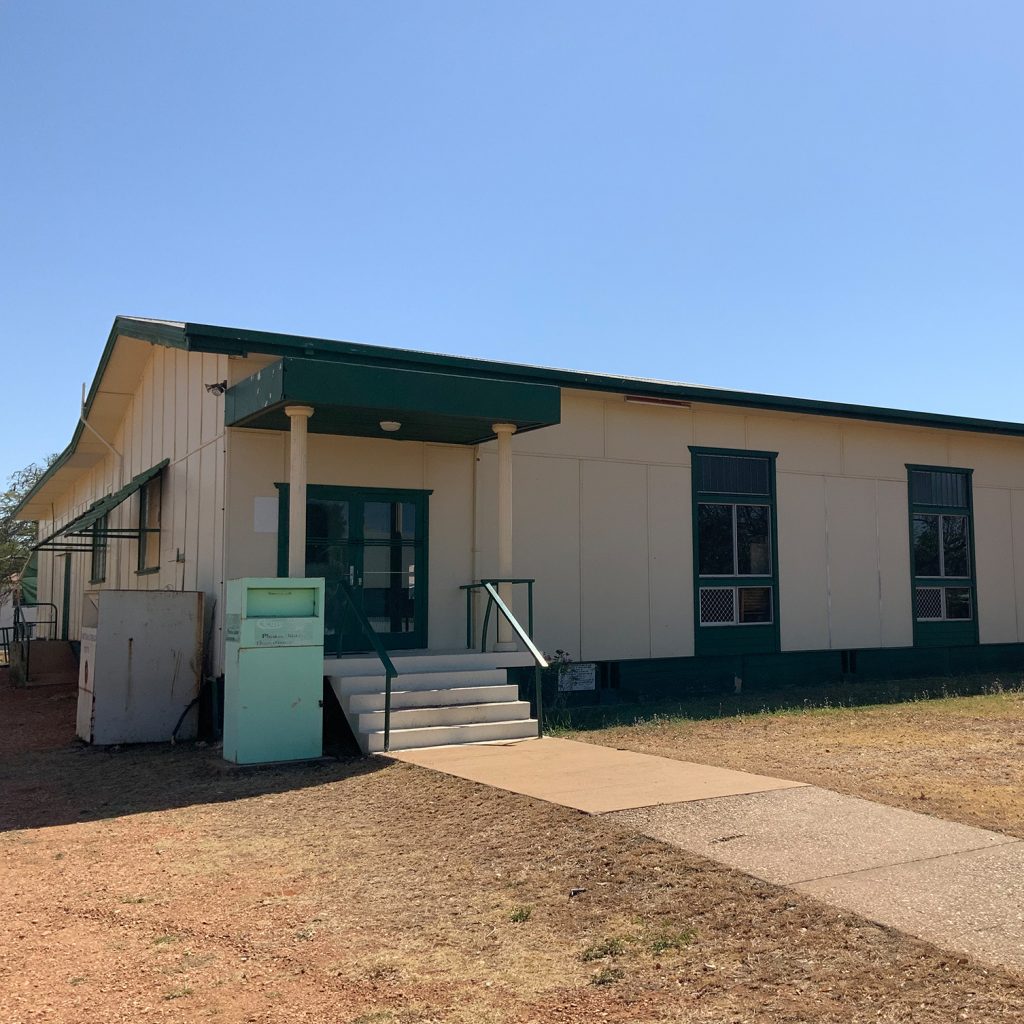 ANGLICAN CHURCH HALL, QLD, WANGAN COUNTRY The Anglican Church Hall stands on the traditional lands of the Wangan People. The small town of Clermont has a large number of buildings with great architecture and stories to go with them. Taking a driving tour around town? Look for ‘the country wave’! The town is over 150 years old … Read more 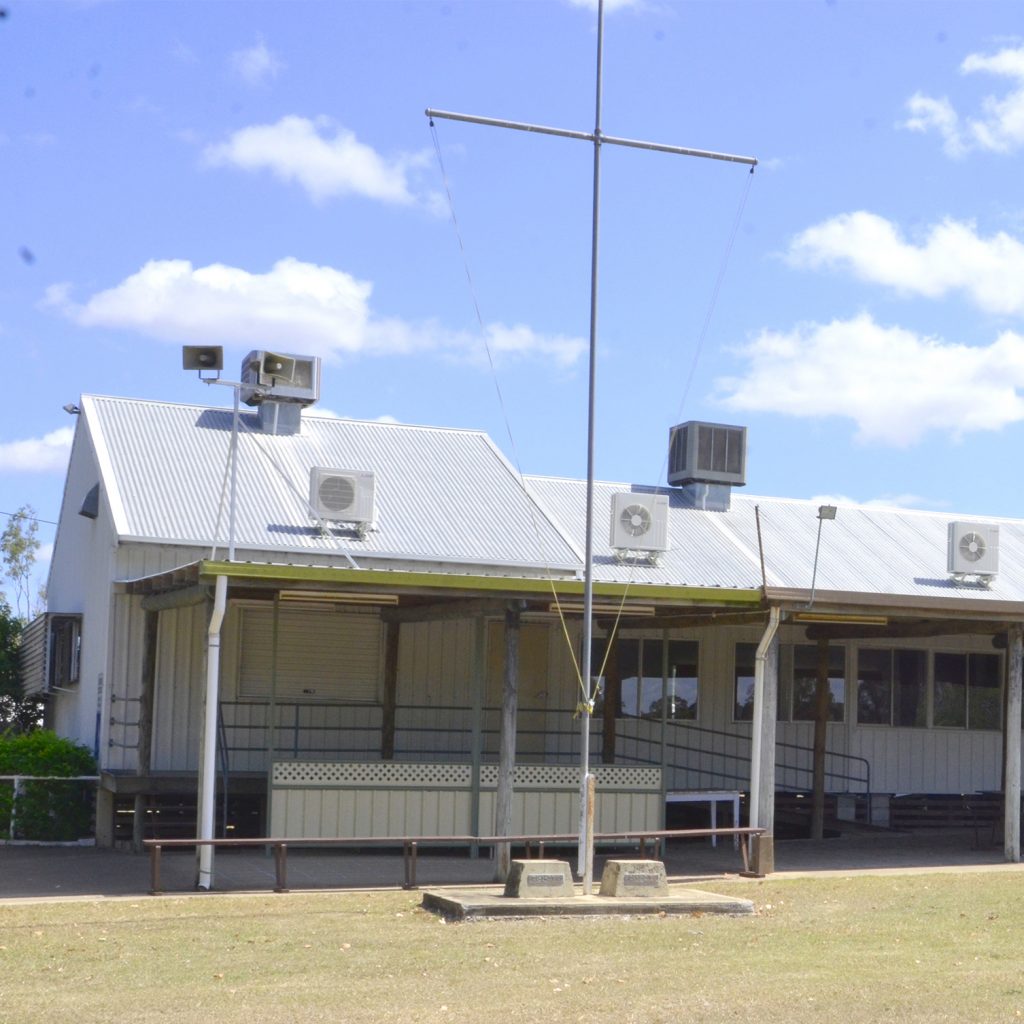 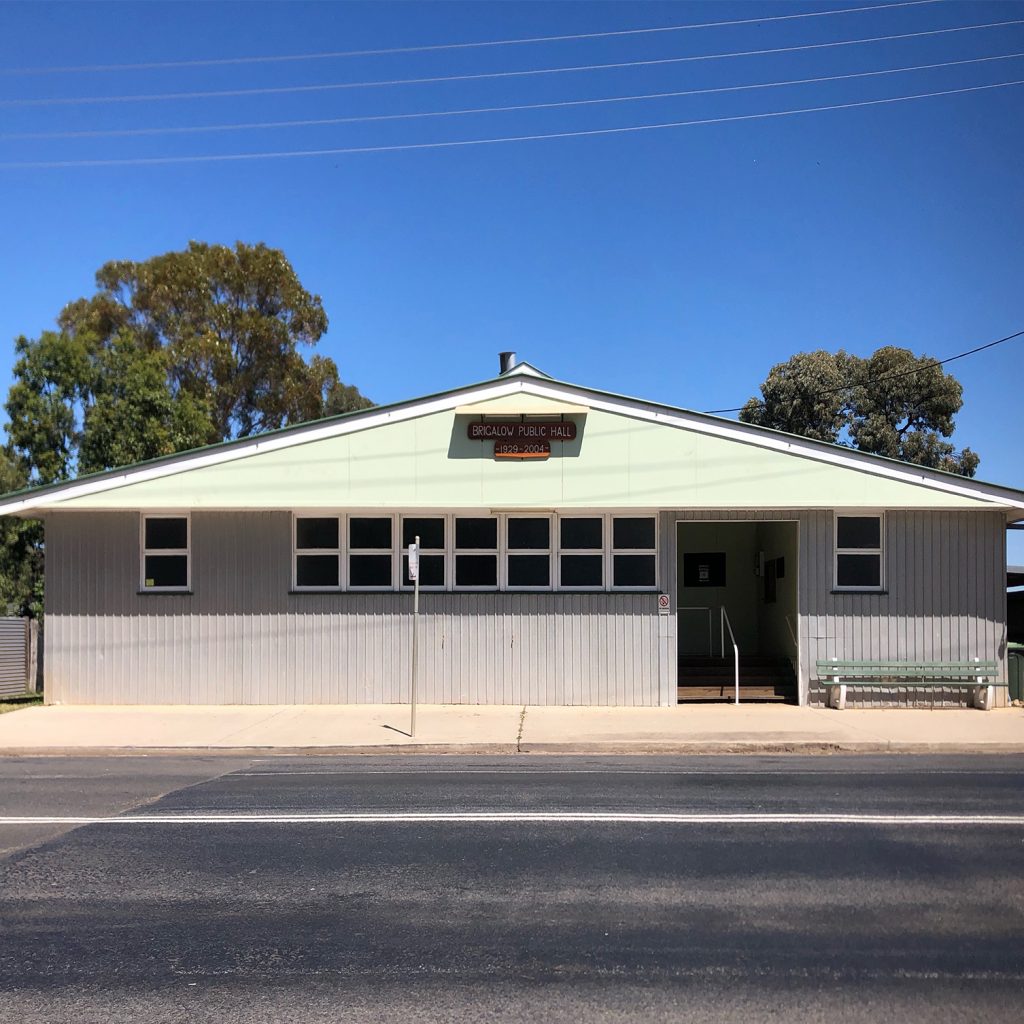 BRIGALOW PUBLIC HALL, QLD The Brigalow Public Hall is located on the Warrego Highway, in the small town of Brigalow. Brigalow is named for the tree – Acacia harpophylla, commonly known as brigalow, brigalow spearwood or orkor, an endemic tree of Australia. The Gamilaraay peoples know the tree as ‘Barranbaa’ or ‘Burrii’. We’ll be looking for the fresh … Read more 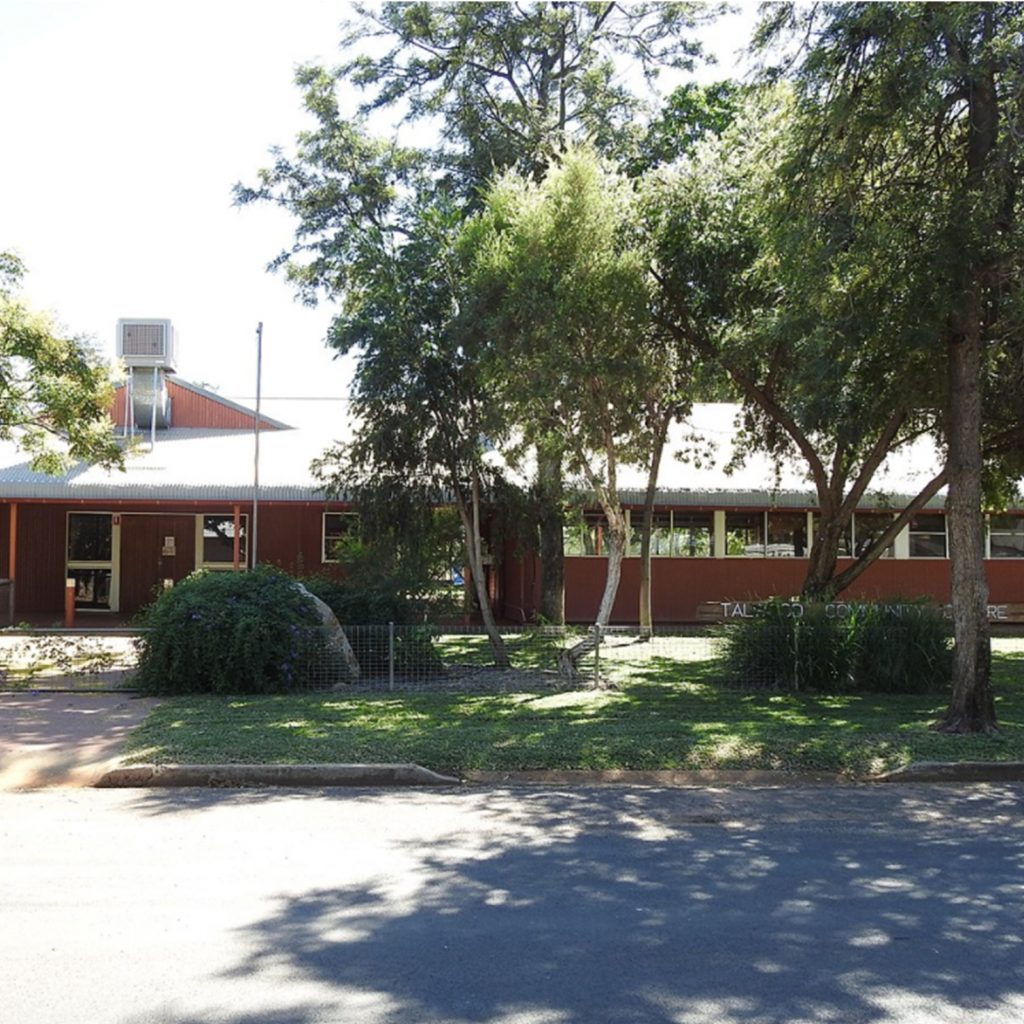 TALWOOD COMMUNITY CENTRE, QLD, GAMILARAAY COUNTRY The Talwood Community Centre stands on the traditional lands of the Gamilaraay people. The Talwood Community Centre has been the go-to venue for many a shindig since the 1980s. Run by locals, for locals, this is where you come when you’re done with the day’s fishing.   This pastoral district, surveyed in the 1860s, … Read more 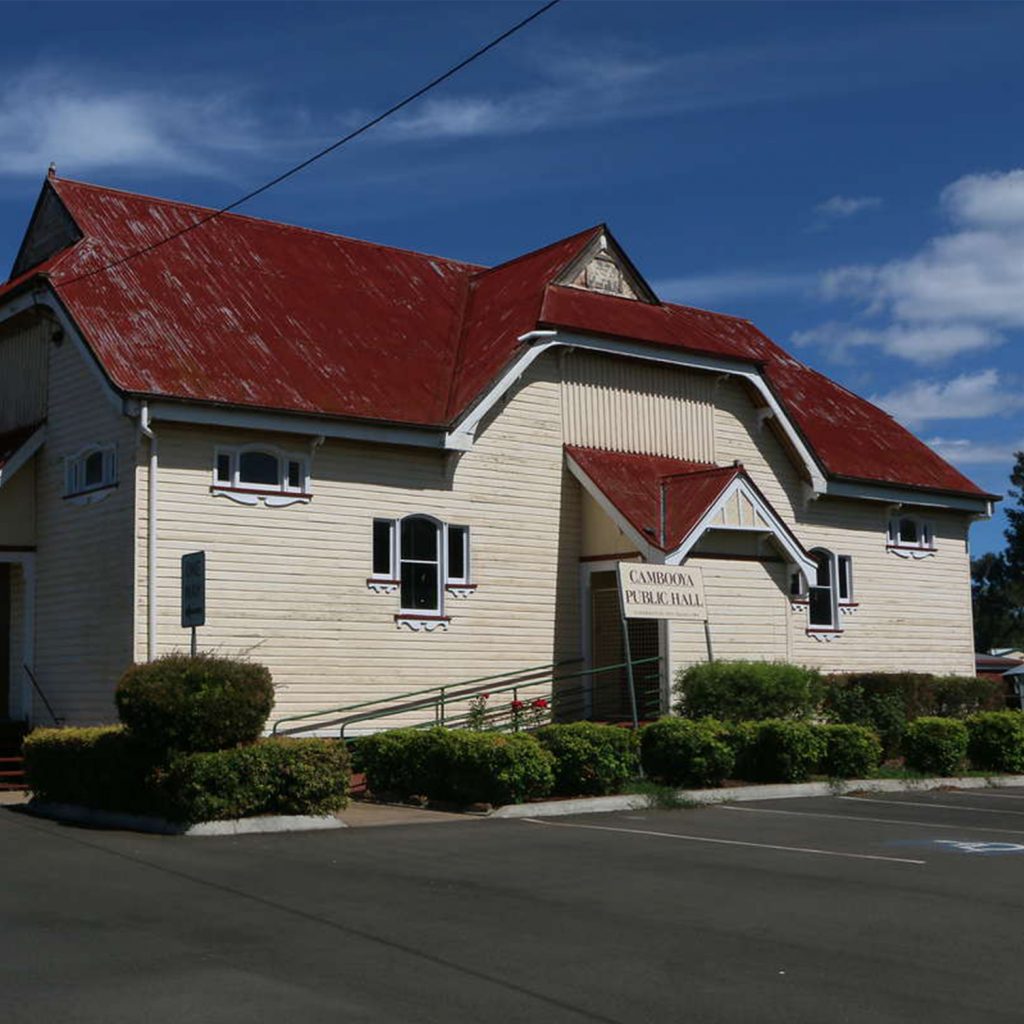 CAMBOOYA HALL, QLD, WESTERN WAKKA WAKKA, GAIBUL, AND JARROWAIR COUNTRY The Cambooya Hall stands on the traditional lands of the the Western Wakka Wakka (wok-ah-wok-ah), Gaibul (guy-ah-bull) and Jarrowair (jar-oh-wah) peoples. Cambooya Hall is a beautiful hall that has just had an extensive revamp and wants to welcome the community back through the doors. Cambooya is the best of both city and country living, being just 20 minutes … Read more 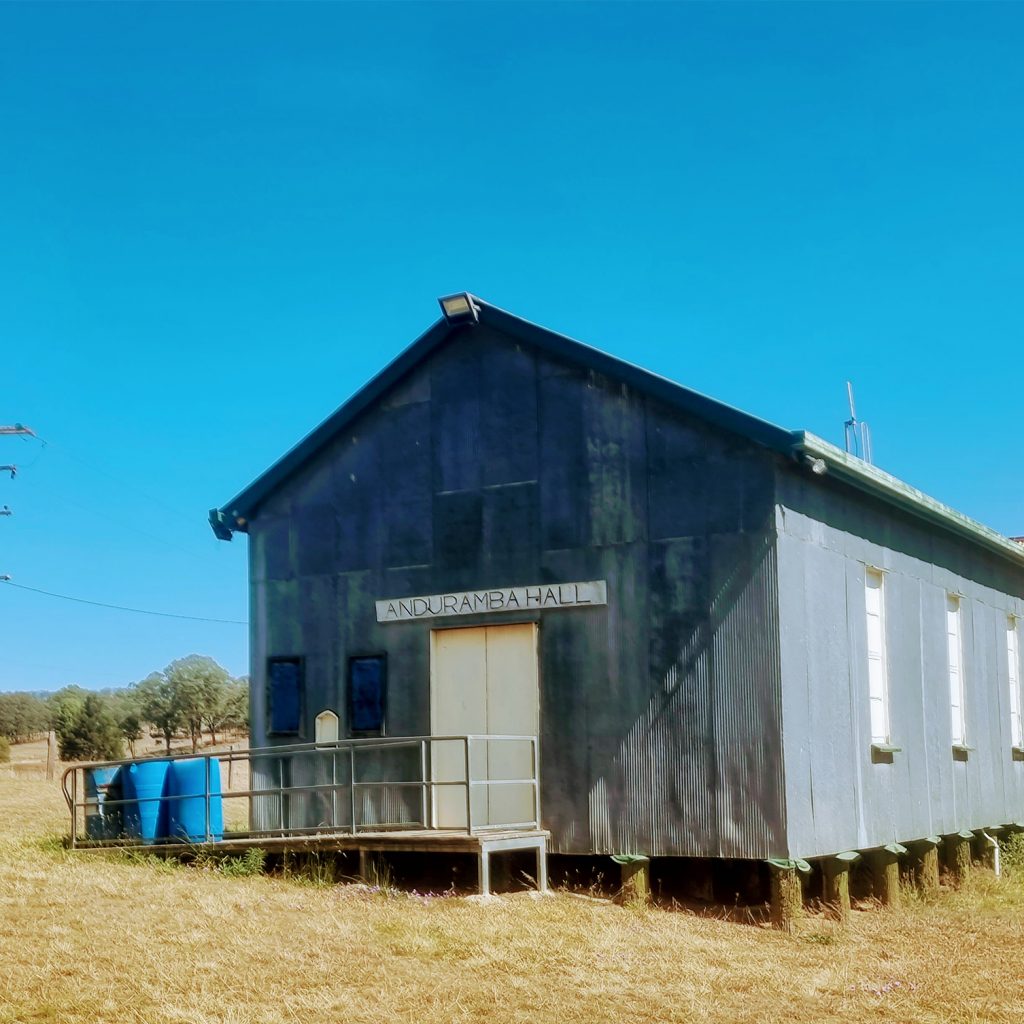 ANDURAMBA HALL, QLD   The Anduramba Hall established 1926… and not in the most traditional way. All the locals helped to build it in only two weeks, on land donated by Dave Stark. With that kind of community spirit, it’s no surprise that every year the Hall Committee hold a Christmas party for the locals and it is well supported. The Anduramba Hall is only 20 … Read more 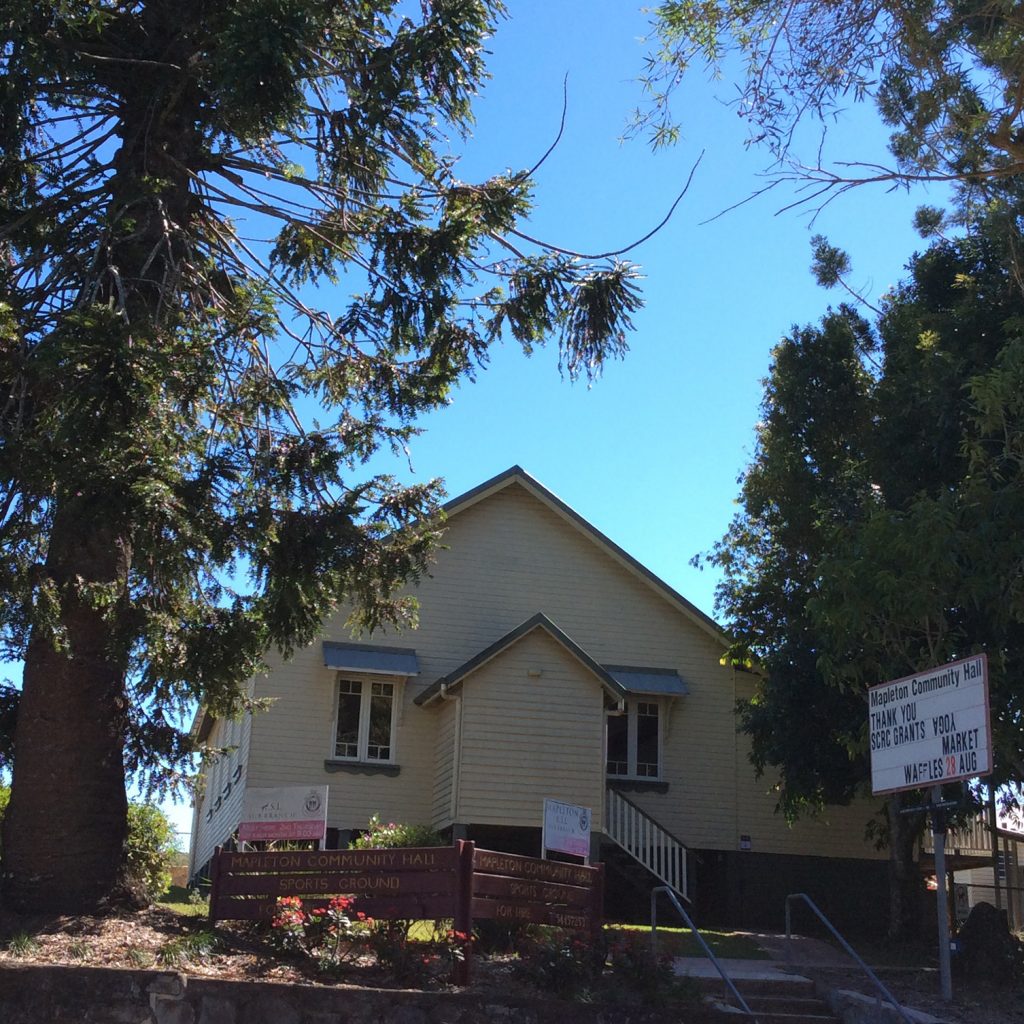 MAPLETON HALL, QLD, JINIBARA COUNTRY The Mapleton Hall stands on the traditional lands of the Jinibara people. The Mapleton Hall is now 106 years old, believe it or not. Over three acres of land was originally donated by a Mr W.H. Rosser, and is still held securely in Trust. Along with the Hall, the property hosts two tennis courts, a Cottage which is home … Read more

Festival of Small Halls has announced that Darren Hanlon and Kelly Brouhaha will be the guests of fifteen communities on October’s Queensland Spring Tour 2021.

After years of touring the far–flung corners of Australia and the greater world, Darren Hanlon has carved a sacred place in the hearts of many who cross his path with his candid and charming music and storytelling. He is known for his engagement with his audiences and having the ability to make a large crowd feel like they’re in a lounge room amongst friends.

The Festival of Small Halls Spring Tour is supported by the Queensland Government through Arts Queensland.