One of Australia’s best live blues ‘n’ roots bands, Hussy Hicks are a tour de force featuring powerhouse vocalist, Leesa Gentz and award-winning guitarist, Julz Parker. Prolific and accomplished musicians, Hussy Hicks have honed their sonic dexterity over the past 13 years with six studio albums, multiple industry awards and more than 1,000 live shows under their belts, from Australia’s biggest blues, roots and folk festivals to 15 international tours, which now sell out across Europe.

With a sonically adventurous reputation and energetic live show, it’s no surprise Hussy Hicks have staying power. From Gold Coast Artist of the Year and Album of the Year wins to Queensland Music Award and Golden Guitar nominations, their critical accolades extend even further, with guitarist Parker winning Musician Of The Year at the 2020 Gold Coast Music Awards; touted by Australian legend, Phil Emmanuel as ‘Australia’s top female guitar player’ and voted fifth in Bluesfest’s Guitar Hero fan poll, among Santana and BB King.

Signed to her first record label at just 16 years old, Leesa is excited to be moving into the next phase of Hussy Hicks with long-time bassist, Tracy Bassy and new drummer, Ali Foster in the mix, making the band an all-female force. Following an award-winning production debut on Beccy Cole’s AIR Country Album of the Year, Hussy Hicks new album is the first in six to be engineered and produced with Parker at the helm.

Never ones to shy away from activism, social commentary or using their voices for the greater good, Hussy Hicks follow up their 2017 Album of the Year winning release with their new 6th studio album, Gather Up The People out on 24 July, which looks at many of the  issues at the forefront of the global consciousness this year, calling for a future without sexism, racism, homophobia and xenophobia, but most importantly, without fear.

“Some artists need to be seen to be believed, and Hussy Hicks fit that category.”

“These girls epitomise everything I admire about great music – instinct, passion, courage, creativity and a distinct refusal to compromise their vision”

One of Australia’s favourite and celebrated female vocalists, Shellie Morris has spent the past 25 years creating and engaging in music as a healing tool.

She imparts the importance of having a voice and that each individual is important.

While she has been in the spotlight over the years for her involvement with Black Arm Band, Deadly awards, ARIA nominations, Music Australia award, NAIDOC Award, G.R. Burarrawanga Memorial Award and Australian of the Year award; by and large, she works on the ground empowering and gently effecting change.

Shellie creates music and sings in around 17 Aboriginal languages, many considered “sleeping”.

Since discovering her Wardaman and Yanyuwa roots over 20 years ago, she has tirelessly worked to improve the lives of Indigenous Australians, especially in the Northern Territory.

She is the 2014 NT Australian of the Year, the 2014 NAIDOC National Artist of the Year, a multi Deadly Award winner and a driving force of the acclaimed album Ngambala Wiji li-Wunungu and the internationally award-winning musical documentary Prison Songs.

The documentary has won film and humanitarian awards around the world and is nominated for five AACTA awards (including best sound and score), ATOM Awards – Best Indigenous Resource and a Walkley Documentary Award.

“Talking to Shellie Morris is like talking to an old friend you didn’t know you had. She has a voice that rings with truth and courage and raw sincerity both when she sings and when she talks.”

“Quite possibly the hardest working Indigenous entertainer in Australia is Shellie Morris. Shellie tirelessly spends no less than 9 months of each year on the road. Her work is divided up between her music, community development, as an educator and mentor.”

“Her music crosses boundaries and musical borders with ease” 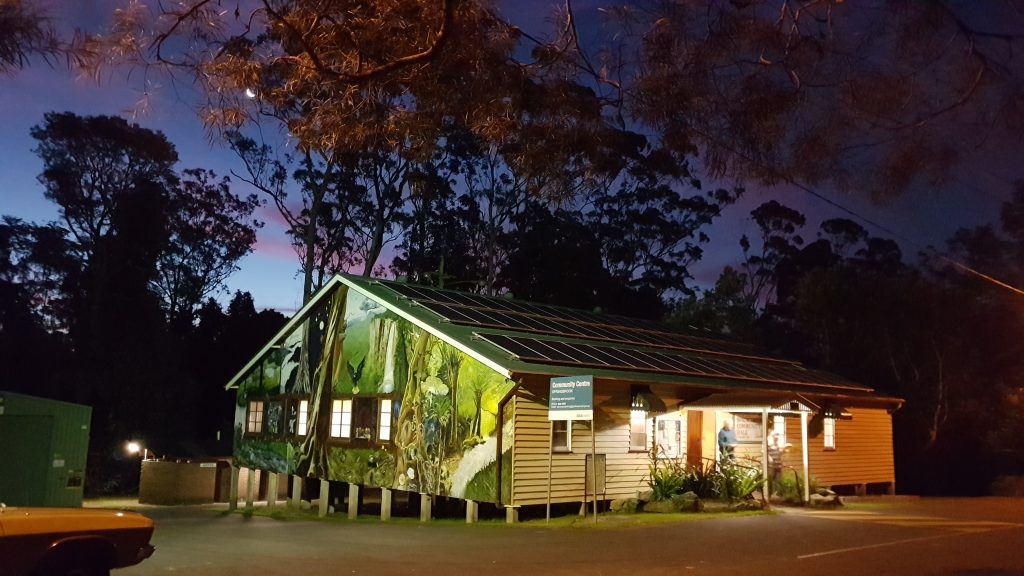 Thanks to the eruption of an ancient volcano 23 million years ago, Springbrook is home to a multitude of things that grow, gurgle and glow. Spectacular waterfalls and lookouts abound as The Natural Bridge cave twinkles with resident glow worms. The wilderness is marked by strangler figs, rare birds and glow-in-the-dark mushrooms. The historically … Read more 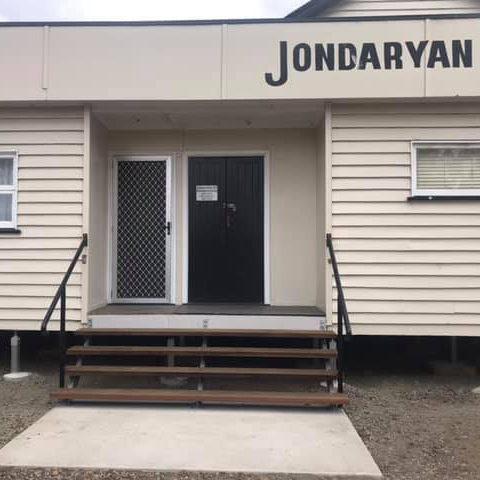 Jondaryan Public Hall stands proudly in the centre of the little village of Jondaryan, off to the north west of Toowoomba - one of few early structures still remaining. Though droughts, floods, a neighbouring fire and the occasional tornado have come and gone the timber building remains firmly entrenched in the landscape. The only unplanned ... Read more

On paper, Texas has a romantic history that can rival Deadwood. Named after the US land dispute, but in honour of a local one between two brothers and some post-gold rush squatters, Texas earned its stripes with farming, silver mining and tobacco. Driving on the meandering road over the Dumaresq River leading out of Texas, ... Read more 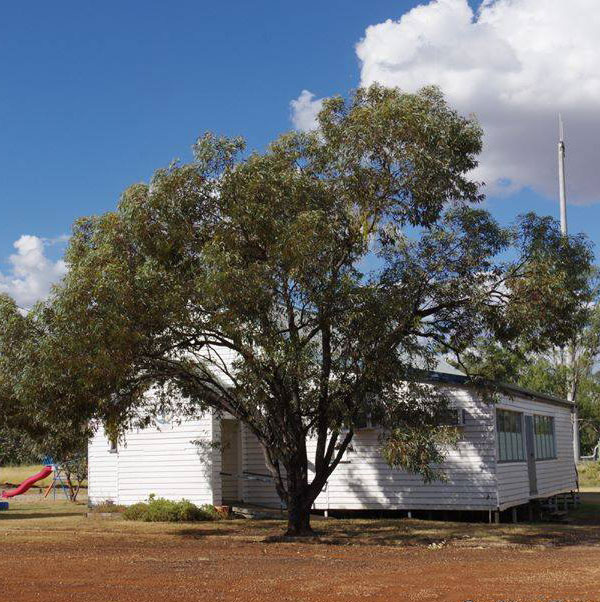 QCWA Hall Jackson has been standing since 1927, providing a space for local people to gather and have fun. In 2020 the Hall is continuing to be used by the community to come together for socialising and functions. There is plenty of space available for parking, camping and caravans. Festival of Small Halls rolls ... Read more

Cunnamulla, meaning “long stretch of water”, gets its name from the picturesque Warrego River which meanders past the town and is a popular spot for fishing and water sports. Cunnamulla is located in the Shire of Paroo which also includes the towns of Yowah, Eulo and Wyandra. The shire has a vast cultural diversity within ... Read more 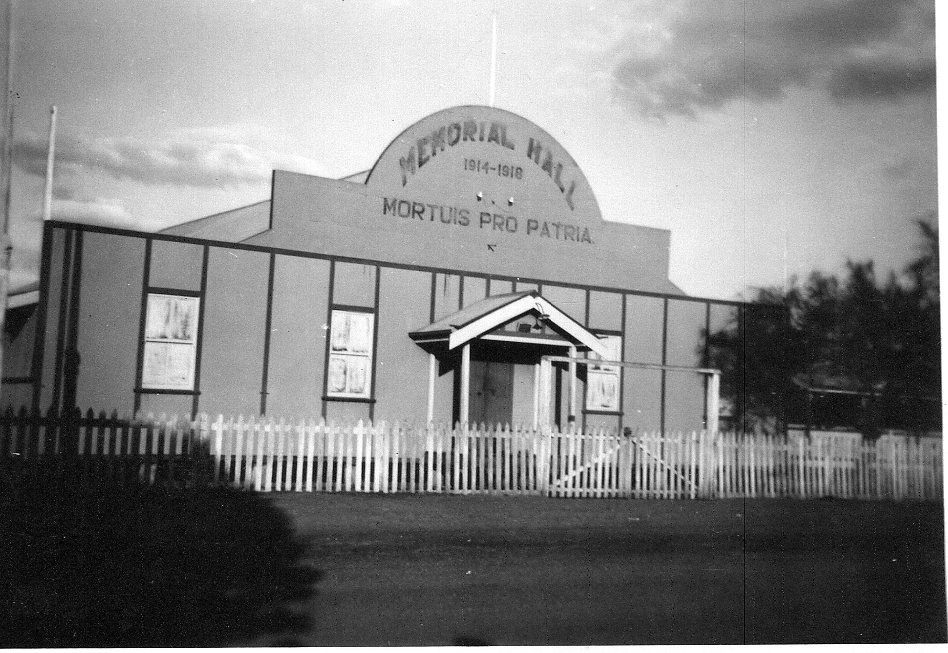 The Barcaldine Town Hall was built in 1912 but has had several alterations. It was constructed in the Federation free style and was designed by architects Alfred Mowbray-Hutton and Fredrick Boddington. The design is  a link pavilion form. There were two separate buildings with council offices at the front and a hall behind, linked by ... Read more 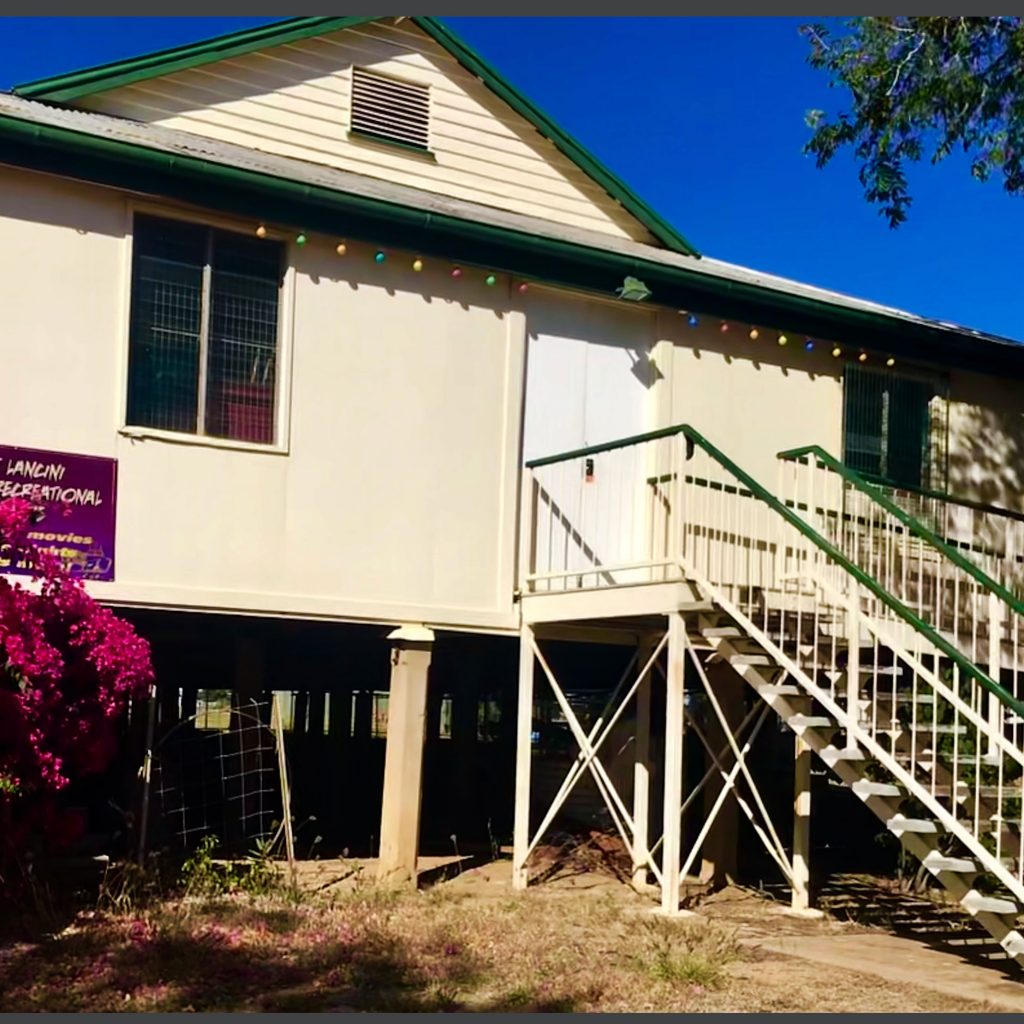 Explorers William Landsborough and Frederick Walker were the first European explorers to lay their eyes on the vast open grassland downs to the south and the harsh basalt country north of Hughenden. A blazed historical coolabah tree stands proud as a testimony to the discovery of this region by these two famous explorers. The first ... Read more 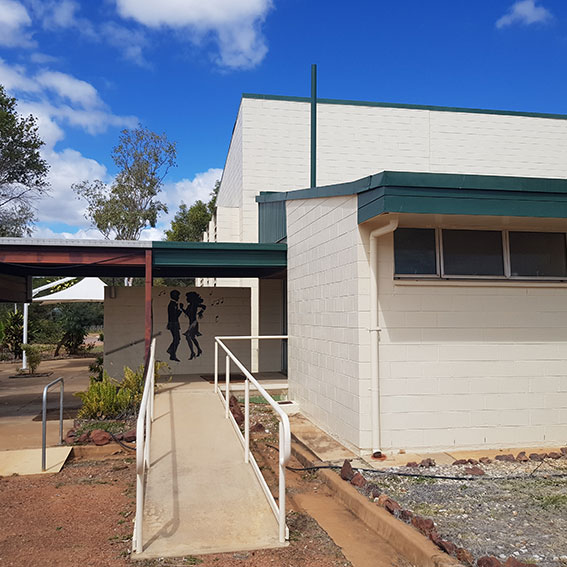 Greenvale Community Hall was built in the 1970s, a central part of the mining town that was built to service the community who worked at the mine. The hall was the centre of community activities for the town, the centre from which all social activities flowed. If the grand old dame could talk, she'd tell ... Read more 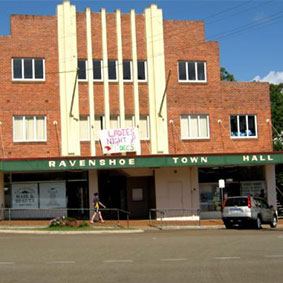 Ravenshoe Town Hall is 60 years old and is a grand building in the centre of Ravenshoe CBD. Still standing proud after many cyclones in her time and the parties the community have had and still to come, many memories have been made here. The grande dame has hosted a Torimba Ball for 52 years, many a debutante presenting themselves to society and our local theatre group, Ravenshoe Amateur Theatrical ... Read more 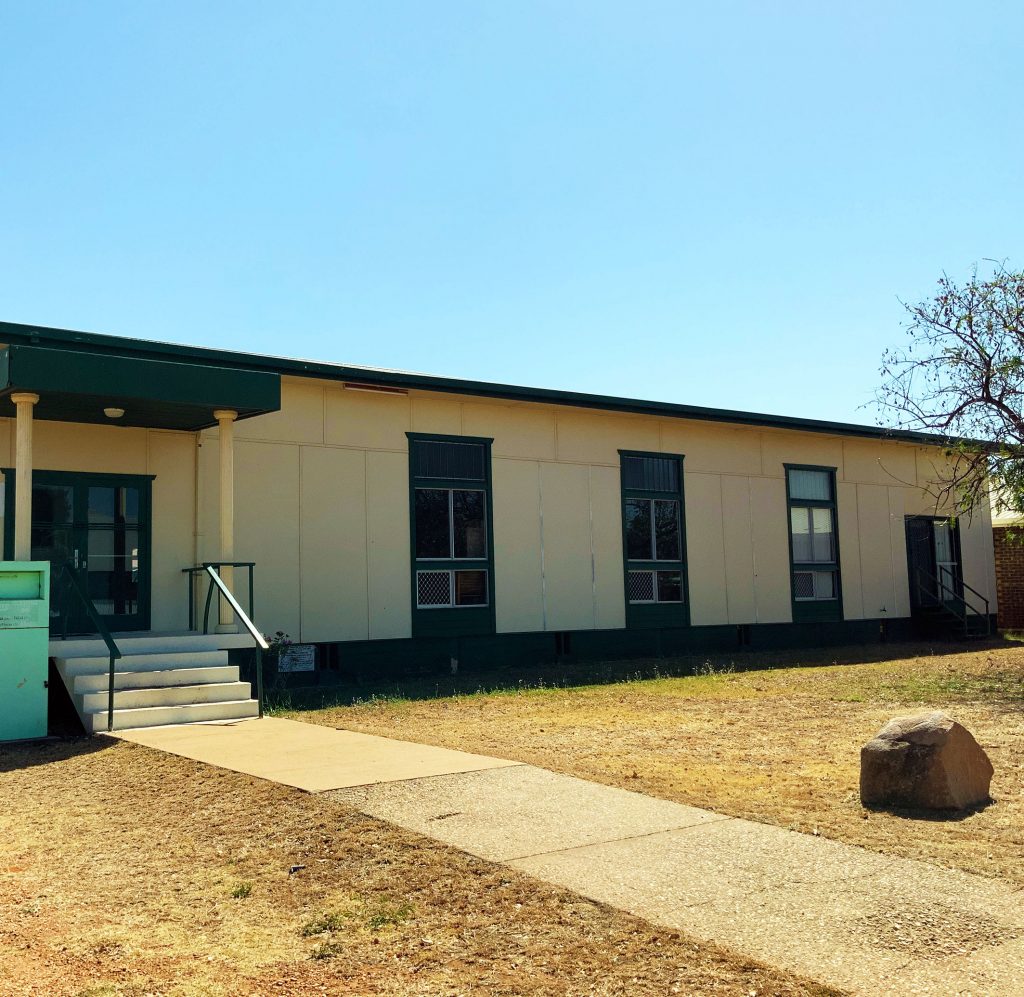 The small town of Clermont has a large number of buildings with great architecture and stories to go with them. Look for the country wave as you drive around. The town is over 150 years old and built on gold, copper and coal mining and agriculture. Famously known as the the town that moved due … Read more 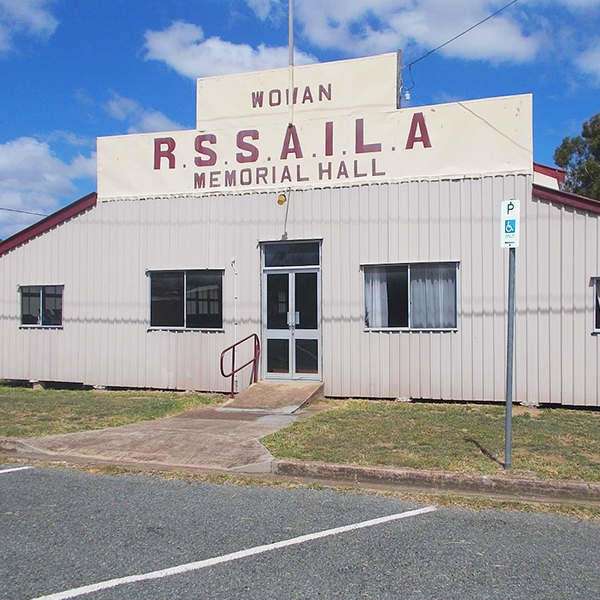 Wowan’s “Small Hall”, known as Wowan R.S.S.A.I.L.A Memorial Hall, was first erected to commemorate those who had served during World War One and World War Two and was officially dedicated on 29th of October, 1940. The celebration ball for the opening of the Hall saw one of the largest social gatherings the town has ever ... Read more 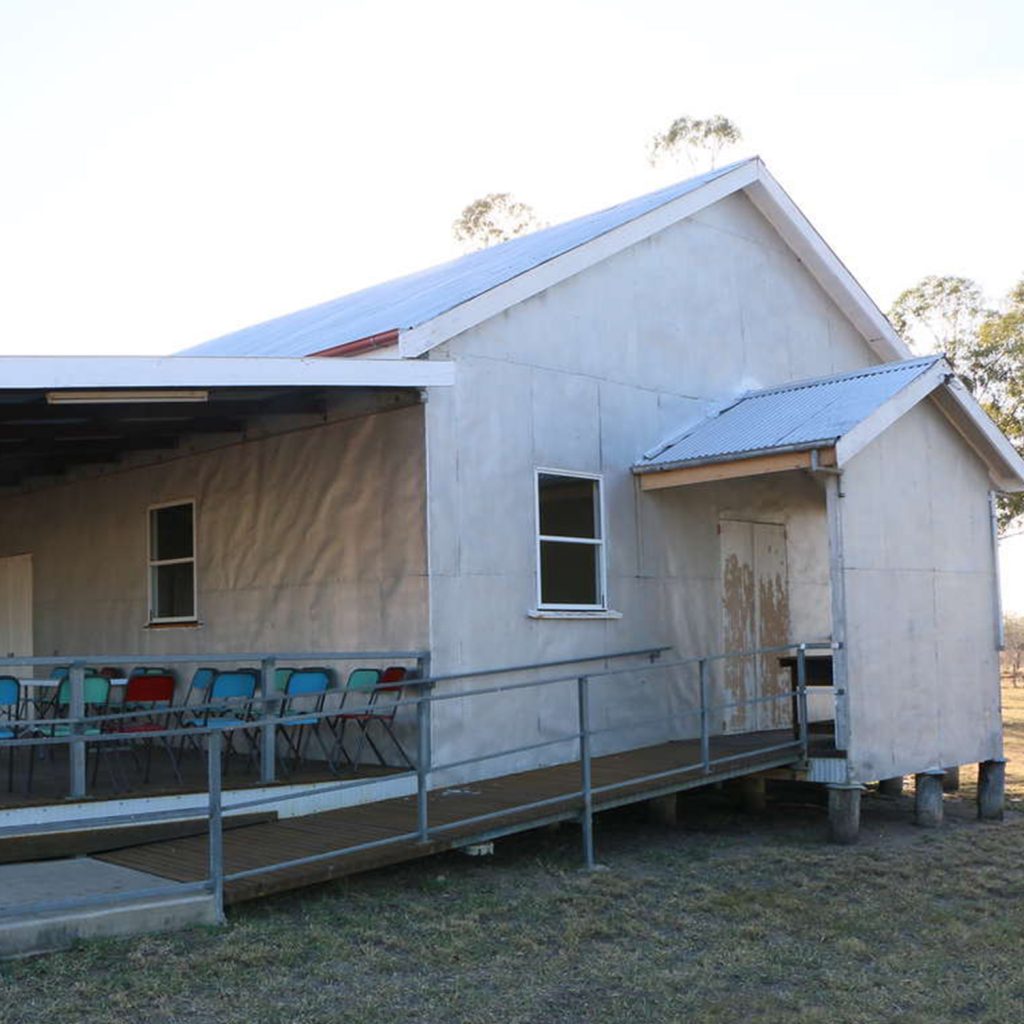 Give a big warm hello to Guluguba, a newcomer to this year's tour! Festival of Small halls makes its inaugural trip this October to Gulugaba. We have been welcomed by the Wandoan Arts Council to visit this small but spirited locality in the Western Downs. Festival of Small Halls rolls into Downfall Creek Community Hall ... Read more 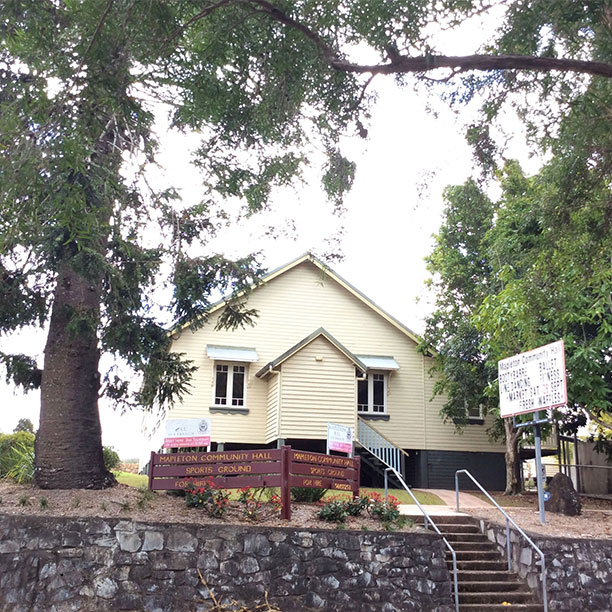 Mapleton Hall has a 104 year old history. It was designed and constructed by local community members in 1916, with the previous hall being lost to a bushfire in 1915. Mapleton was a farming district for citrus, pineapples and dairying. It also had a large timber industry, with a hardwood timber mill, three smaller timber ... Read more 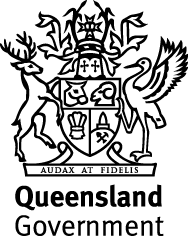