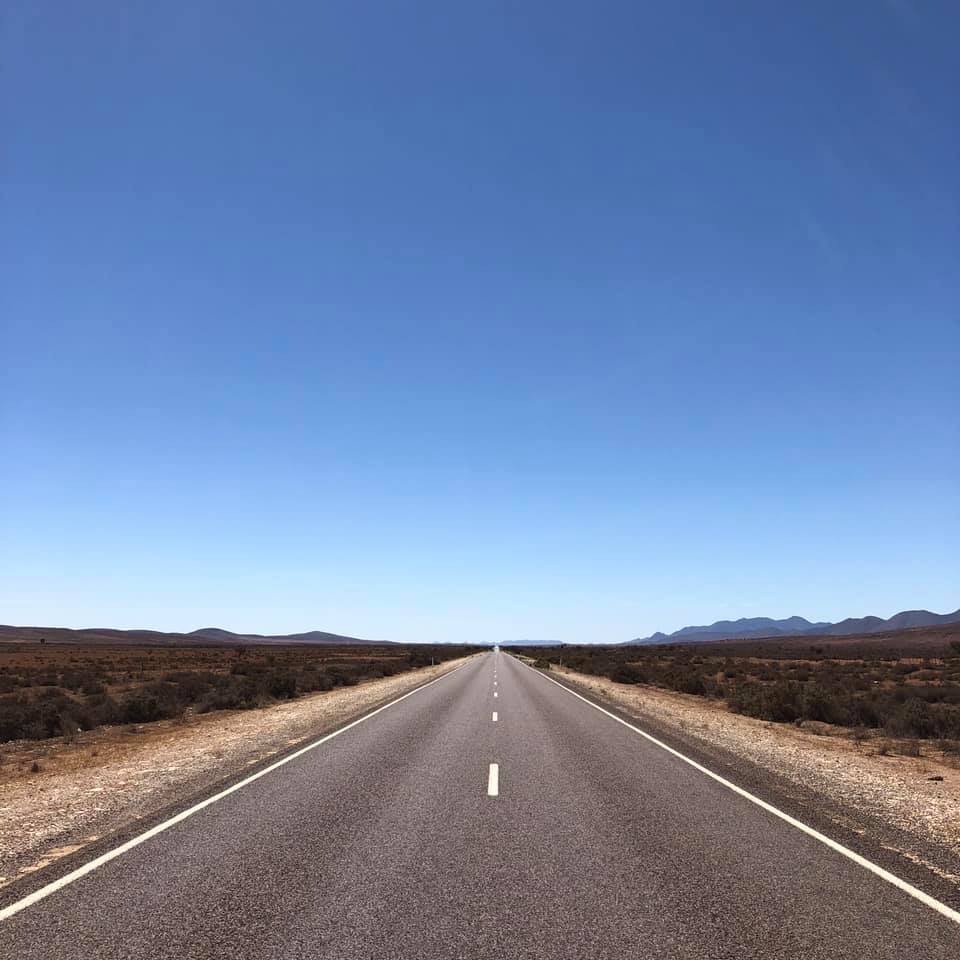 The Once and John Flanagan continue on their Small Halls tour! Just when you thought their stories couldn’t get better, these next few towns brought a whole new level! The next town they went on to visit was the friendly community in Orroroo, which includes the friendly animals too…

Dear Orroroo,
When we pulled into Orroroo, the small town was hoppin’. High school kids were singing in the square and the locals were setting up for an amazing 3 course meal that we were more than happy to partake in. After supper, I (Geri) took a stroll to help me digest. I saw my first kangaroo of the trip (really far in the distance) and these most gorgeous puppies that had escaped from a fence nearby. They had mama doggy worried sick. They went back in after some coaxing. Later in the evening, before the show, I brought Phil by to see ‘em and lo and behold they had snuck out again. This time daddy puppy joined mommy puppy in the worry. We gave them many head and tummy scratches and put them back where they belonged. Mom and dad got some head scratches too. Sweetest puppy family ever! Little friggers. Have they never seen the size of the vultures?

I digressed a little to share that. Hope you are still with me. It’s worth it. Trust me. The town were celebrating the end to a TWENTY year battle for a pipeline to get fresh, drinkable water. They were elated. As they should be. The town HAS been in a drought for 2.5 years. Yes. You read that right. I can’t even imagine it. The crowds, like all the towns so far were epic. Some high school students even opened for John Flanagan and ourselves. DOLLS. Friggin’ dolls. The MC was the local shop owner and he slayed it! The whole town was in such a good mood. We couldn’t believe our luck to arrive on such a monumental day. The ABC radio folks were there and we got to have a great interview and hear and talk all about it. One for the books. Later the next day, before we drove out to Beltana, I met a lady who told me that she and her husband moved to Orroroo a little while back. Her husband was sick. She said no one saw him except the nurses and volunteers who cared for him. Still, when he died, the whole community came out to pay their respects. Now that’s a town to keep you around when a drought is on.
Thanks for everything Orroroo. We wish you all the best. See you down the road.
The Once

How amazing is that, what a tight knit and supportive community. It’s the people like this that are able to create an amazing town from nothing. After they were able to separate themselves from the lovely community (and puppies), they headed back to the dirt road to Beltana…

Dear Beltana,
For a start, you were worth the bumpy road that surely switched our kidneys and liver in the bounce. We have to be all shifted up after that. We have to. If I remember correct the town had 35 people. We managed to get over 50. So some people bounced in to see us. Thanks for that! This is a small town like I grew up in. 16 houses if you remember the story. Beltana, you used to be a bigger town but farming went by the wayside after severe drought and made it hard for people to stay if the story I heard was correct. And correct me if I am talking out of turn. We had an amazing welcome from some of the Adnyamathanha people. It was very powerful to hear the traditional persons of the land speak their enchanted language.  The sunset has some of the most beautiful lines in the sky. Phil hauled me outside to see ‘em. I was told later that the lines those that are depicted on the Japanese flag. Neat hey?

The sky likes like those on the Japanese flag

Me and a local we’re fighting about what is cooler, those lines or the northern lights. Ha. We both win, I says. John O’Dea was the local opening act. He was beautiful. He is Australiana at its finest… The honour was ours. Andrew and I got two CDs each. We did our show, got heckled to play Country Road, got the best hugs, said our goodbyes and bounced on out of there terrified that we would see a Kangaroo. Those things can jump. And out of nowhere. Imagine if moose jumped 4-6 feet each time they moved……? So scary. Beltana you rock! Thanks for the love. We felt it. Especially when you let us borrow your brush and gave us ice cream.
The Once

Sounds like these towns are really showing off what makes them Australian! Such talented people to be found in all corners of this beautiful country. It was then time to say goodbye to South Australia, and head to Victoria! The first show in this state was Red Cliffs, and it was a big one…

Hey Red Cliffs,
We woke up at the crack of dawn and hit the road by 6 am to come do a show for you folks. Because of you we saw over 60 kangaroos, 4 emus, 8 vultures half our length and 100s of sheep and cows.
It was hard to try and take a nap for what we would miss. It was St. Patrick’s Day! Our tour manager is Irish so we went looking for a pub on arrival. We passed by Big Lizzy! What a size of a machine! Never seen the like.

Then we climbed into the casino (the heat had us on our asses) for a pint. When we got back to venue, Tiny Feet we’re getting ready to play. They were our local openers. Steph and Ben are there names. Holy were they ever good. What a dynamic duo! The talent in these small towns is, again, world class. All and all, the night was great and the food was perfect. Well worth the 7 hours (plus stops).
Thanks for havin’ us Red Cliffs. And thanks for clapping along to everything. Now that’s exuberance!
The Once

Sounds like an awesome first week! Looking forward to hearing more stories about the next few weeks on the road.