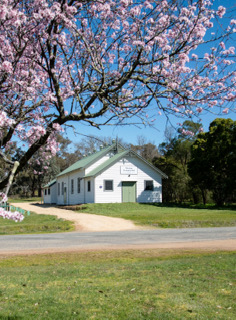 Merton…located 150 kms just east of north from Melbourne on the Maroondah Highway, was made famous (again) by the Corrigan family in the classic archetypical Australian drama “The Castle”.

Who could forget their most lyrical chant of: “We’re goin’ to Bonnie Doon…”, and the picture perfect (albeit fleeting) view from their car of the Merton servo flashing past in the background!

Ned Kelly also strutted his stuff here (according to local folklore), raiding the Cobb and Co. Transport system at will, on the Euroa/Mansfield line.

The Merton Pub had a clean-through bullet hole assuredly from Ned’s own pistol, into the front wall of the bar.  (So say some locals, this hole exists to this day –technically—even though the pub has now been burned to the ground!)

The Merton Hall was built in 1923 as a mechanics institute, but was renamed Merton Memorial Hall in 1945 after the war. It has had its most recent uplift/makeover finished last year to the great acclaim of all serious hall renovators.

BTW, the hall was a great social magnet, with dances and balls being held till 1979, when  the local gendarmes intervened, allegedly due to the mischievous ghost of Ned (or maybe some other type of spirit..nod nod..) causing general  mayhem.

Merton has one of the oldest Race clubs in Victoria…continuous racing in Merton since 1865. (Gees, those horses must be tired by now but…!)

Facts: Within the 25 sq km Merton zone there are approx. 300 resident farmers and tree changers (quality not quantity is the vital factor here!)

We acknowledge the original land owners as the Taungurung  people.

Festival of Small Halls rolls into Merton on Wednesday, 27 March 2019 with award-winning Canadian trio The Once and Australia’s John Flanagan.

Finger food and drinks will be for sale at bar prices.

Tickets $25/ $20 concession/ Free for children 12 and younger accompanied by an adult.