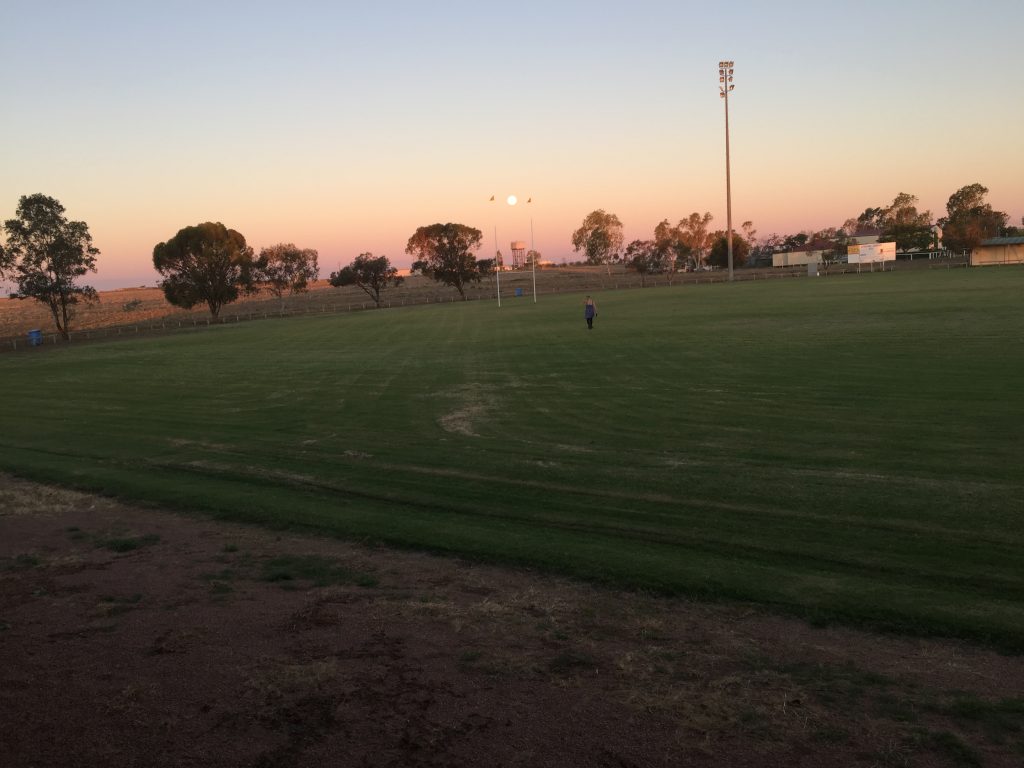 I’m writing this in Yeppoon, a small coastal town in Queensland near Rockhampton. The view out of the hotel window is pretty good. Straight onto the ocean across the road. But I’m inside trying to book a car with frequent flyer points. Turns out that’s disproportionately time consuming.

The glamour of touring. I’ll definitely be getting in that water I can see out the window though. At some point.

We’re up to gig 17 or something. I’ve stopped counting. Even when I was counting I was doing it incorrectly. So 17 sounds about right. I’ve been on the road for most of this year. Extremes in climate and coffee quality. And extremes, also, in mental health levels and in my extraordinary ability (some would say talent) to lose possessions, even after all these years of being on the road. I’m not winning the latter battle, at this point. The former, though, I’m holding my own in by swimming every day. I drive sometimes an entire hour round trip, before anyone else is awake, to the closest lap pool to get a kilometer into the arms. And early sun on the back. To gently force the mind to move in a straight line, instead of turning in a circle, down into itself. I think that might make me somewhat of an idiot, to get up that early, but being the only person swimming in an old, tiled pool in a tiny regional town just after dawn continues to bring me inexorable joy. I may as well take advantage of this particular kind of idiocy while it lasts.

It’s the Festival of Small Halls tour that’s rounding out the year for me. Twenty shows (I think, clearly I’m not sure…) through regional QLD, the (massive) region of Australia that I’ve toured the least in. Holy shit. What a delight to be somewhere so familiar I can feel it in my body and yet so utterly new. Driving for hours past cane fields. Scrubby, red dirt country that morphs into lush, tangled jungle, ticking with the tiny comings and goings of tropical creatures and birds that cry out at night. The eye can’t see the change, and only stares in wonder at how the country is ‘suddenly different’. It’s hot. Thick heat. Around the clock. Beautiful and complicated and hot.

I’m on the road with three travelling companions, the Festival Of Small Halls crew. These shows have been microcosms of country Australia. I’ve never said the word ‘community’ so many times in a short period. That’s the concept that FOSH is built around, the idea that people want somewhere to congregate and be together. In the 1950s and 60s, light spilled from these halls several nights a month. Dances, New Years Eve parties, weddings. This was followed by long years of quiet, as the dust gathered and flying foxes began to nest in the roofs. Maybe this quiet coincided with everyone getting a tele at home. Maybe priorities changed. But now, decades later, a collective yearning for togetherness has seen these beautiful buildings being dusted off, and bunting strung up, old roads opened, car parks marked out on grassy verges, cakes baked, best shoes put on, sausages grilled and curries cooked in massive, blackened pots, and old friends and neighbours shaking hands and kissing smiling cheeks as they arrive from their homes, having driven, in some cases, hundreds of kilometres for the occasion.

The formal part of the evening begins. A welcome to country. And then sometimes a local musician performs, or an acrobatic troupe, or a politician from the region. Then we play songs. Maybe some of these punters sit in the rows of chairs in the hall that they learned to dance in, or behind which they kissed their first sweetheart, and allow themselves to drift back to older days, and feel the smooth boards under their feet and the timber beams above their heads. A rare moment of suspended time among country that’s been in drought for years, or ravaged by coal-mining, or developed to welcome whole new populations, babies born, loved ones seen off. Slow change, like the country outside our window while we travel between these towns. Changes that are imperceptible in the moment, but profound in their sum.

It’s a simple privilege to provide music for these scenes every night. And I’m grateful for being the recipient of often tender and vulnerable post-show stories from so many of these locals. I guess I spilled my guts, so they feel safe to do the same. And that’s what propels me to keep touring so much. Maybe more structure and less chaos would be easier to manage for my, at times, unstable disposition. But this is the way I want to live. Even with the fourteen hour drives and the shitty wifi and the missing my people and my old haunts. I make jokes about being from Melbourne at these shows, that I wear black a lot, that I’m a coffee snob. Both things are absolutely and somewhat embarrassingly true, in my case… And, particularly on this tour, I am acutely aware of how different the Australia that I grew up in is to the one these locals know, and how many things that preoccupy and worry me in the city fade into an barely perceptible water colour out here.

I will always continue to have a lot more to learn.