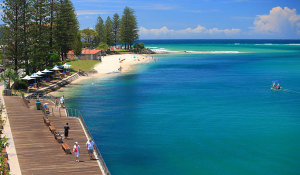 Sitting at the old school end of the Sunshine Coast, Caloundra boasts views of the heritage listed Glass House Mountains, the sparkling waters of the Pumicestone Passage, and a breath-taking coastal headland with interesting coves and sandy beaches. Caloundra takes in several beaches each with their own personality and loyal devotees: Golden Beach, Bulcock Beach, Happy Valley, Kings Beach, Shelly Beach, Moffat Beach, Dicky Beach and Currimundi. The Caloundra Coastal Path stretches along some of the most scenic shorelines you could ever wish to see. Along the way it passes some historic sites including Military Jetty used for military operations in World War II, and the heritage listed Kings Beach Bathing Pavillion constructed in 1937.
Kings Beach is Caloundra’s premier surfing beach and just behind the beach itself is a funky playground area, barbecue facilities and an amphitheatre for major events. A giant water fountain provides hours of entertainment while in front of the Surf Club there’s a unique foreshore swimming pool. Major attractions in the area include Australia Zoo, Aussie World and the Ettamogah Pub, Big Kart Track and the Queensland Air Museum. If you’re a golf nut, you can tee off at the challenging Greg Norman-designed Club Pelican. For the sleepy end of the coast, Caloundra is anything but.

It is thought that the name was derived from an Aboriginal word describing Queensland beech trees, of which several species are found in coastal rain forests.